Two people found guilty of anti-social behaviour in Ashford have been ordered to pay a total of £3,555.77 in fines and costs, with Ashford Borough Council warning that such behaviour will not be tolerated and that it will not hesitate to bring other offenders before the courts.

The unrelated cases were heard separately at Folkestone Magistrates Court. Both the defendants failed to attend court but the cases were tried in their absence, and both were found guilty on charges brought under the Anti-Social Behaviour Crime and Policing Act 2014.

Kelly Michelle Smith was charged with failing to comply with a Community Protection Notice, issued by Ashford Borough Council, after she left a loaded trailer of black bags containing waste items at the rear of a property in Kilndown Close, South Ashford, obstructing a public footway. The court heard that the defendant failed to comply with a Notice that required her to remove the trailer and all associated waste from the path.

The court heard that the problem came to light after a routine check of Kilndown Close by the council’s Street Scene team in October 2020. At the start of the investigation the waste was piled on a trailer. The trailer was later removed but the waste remained.

The council’s legal representative showed the court photographs that clearly illustrated the problem that other residents were being subjected to. An application was made for legal costs and the costs of the three officers’ time in investigating the case. The court was also asked for a compensation payment to cover the cost of the council removing and disposing of the waste.

The case was declared proved and Ms Smith was fined £1,200, ordered to pay a Victim Surcharge of £120, legal costs of £651, officer investigation costs of £499.77, and clear up costs of £300. Payment was ordered within 28 days and a collection order was made, meaning the court will recover the payments. 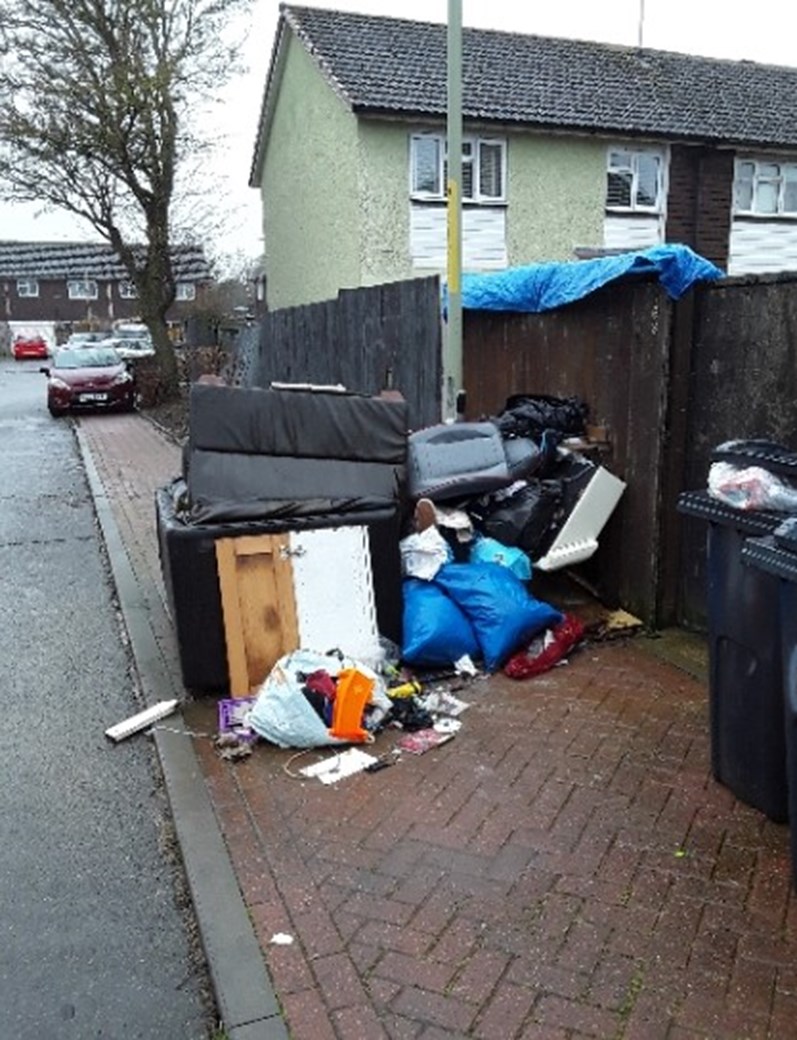 In the second case, spending a penny in the street cost Stephen Childs of South Ashford £785 in fines and costs.

The court heard that the offence took place on 12.10pm on 25 August 2020 in the vicinity of RSPCA Ashford Garden Cattery in Station Road, an area that is subject to a Public Spaces Protection Order. The order states: “No person shall urinate or defecate in a public place. This includes the doorway or alcove of any premises to which the public has access”.

Ashford Borough Council’s legal representative told the court that Childs urinated up against a wall. She ran through all the evidence and witness statements, drawing attention to the fact that the defendant admitted urinating as charged to a police officer at the time.

The case was declared proved and Childs was fined £100, ordered to pay a Victim Surcharge of £34 and the council’s legal costs of £651. Payment was ordered within 28 days and a collection order was made, meaning the court will recover the payments.

Cllr Andrew Buchanan, Ashford Borough Council’s portfolio holder for the environment, paid tribute to the local authority’s officers who had worked so diligently to gather evidence and bring the cases to a successful outcome in court.

“Community Protection Notices and Public Spaces Protection Orders are effective tools in our armoury and we will not hesitate to take further action against people who show no consideration for others in our communities.”

Other News you may be interested in
A Sporting Chance launches in the Ashford borough
£175,000 boost to help tackle homelessness in Ashford linked specifically to COVID-19
Localise, the new ‘High street in your hands’ app
Got a story to share?