One of Ashford's historic dilapidated buildings set for huge transformation

A building in Ashford town centre which has stood derelict for nearly 20 years will be demolished to make way for high-quality apartments located a short walk from Ashford International Station, with its 38 minute fast rail connection to central London.

The 19th century Swanton House served as an auxiliary military hospital in the First World War, and was later used by Kent County Council’s Social Services. Unfortunately the building was beyond economic reinstatement but, in recognition of its history, a planning condition requires that the developer brings forward details of a scheme to record the site’s local history to Ashford.

The building – next to Ashford College in Elwick Road and backing onto the Memorial Gardens – was purchased in 2019 by the development arm of A Better Choice for Property Ltd, an independent private limited residential investment/development company owned by and funded by Ashford Borough Council.

A planning application was submitted in June 2020 to demolish the dilapidated building and build 34 apartments in two blocks. However Ashford Borough Council’s planning committee deferred the application due to concerns as to whether the design was sympathetic enough with the surrounding conservation area.

Now the scheme has been redesigned to be more in keeping with the character of the area, with the flat roofs replaced with pitched roofs. Metal-clad gabled features have been introduced to represent the surrounding 19th century architecture as well as the features on Swanton House itself.

The apartments will include a mix of six three-bedroom flats, 24 two-bedroom flats and four one-bedroom flats, all with private balconies and built to a very high specification. 25 of the 27 car parking spaces will be fitted with electric vehicle charging points. 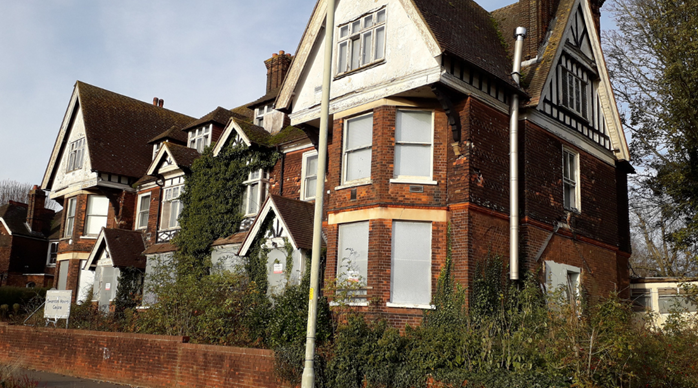 How Swanton House on Elwick Road currently looks in January 2022

When the application was resubmitted to the planning committee, A Better Choice for Property said the redesigns had been made to “blend the positive features of the previous scheme to create a positive architectural design that both reflect the ever-changing streetscape of Elwick Road as well as appreciating the local conservation architecture that the previous Swanton House proudly emphasised”.

A report recommending approval of the plans told councillors that the proposal is considered a ‘contemporary twist’ on the pitched roof of the existing building and would relate the development better to both buildings in the conservation area and the modernist architecture within the vicinity. The applicant had taken a great deal of care on the detailing of the buildings using traditional materials appropriate to the conservation area.

“I conclude that the scheme would accord with key policies seeking responsive well-designed buildings and that its benefits outweigh the issue of any harm to the character of the conservation area, especially when taking into account the derelict nature of the existing building,” the report concluded.

Resolution to grant planning permission was passed by 11 votes to two, subject to a number of planning conditions, including bringing forward details of a scheme to celebrate the site’s local history to Ashford (including its status as a WWI hospital).

About A Better Choice for Property Ltd

ABC for Property is an independent private limited residential investment/development company wholly owned by and funded through Ashford Borough Council. Its aim is to build a private market rental portfolio of up to 500 properties which will not only provide A Better Choice for Property for its working tenants but also a significant alternative revenue stream to the council.

While the focus is on Ashford, the company is not geographically constrained and might consider opportunities outside the borough. Of particular rental interest are new build one and two bed flats, and two and three bed houses but the company is open to buying for private market sale.

Called Infinity Ashford, in honour of John Wallis (1616-1703), one of the world’s most eminent mathematicians, and best known for his pioneering work into infinity, the multi-million pound scheme will be built at the junction of Beaver Road and Avenue Jacques Faucheux, opposite Ashford International Station.

The scheme includes 216 homes (207 apartments and nine riverside townhouses), plus three commercial units on the ground floor. Consisting of four main buildings at different heights, a rooftop restaurant will be a star feature of the 16-storey tower.