Ashford 180 celebrates the 180th anniversary of the railways in Ashford, marking the arrival on 28 November 1842 of the South Eastern Railway’s first train.

Ashford 180 takes place at eight venues in Ashford Town Centre over the weekend of 19-20 November 2022.

AIMREC (Ashford International Model Railway Education Centre) is working with Ashford Museum, Ashford Library, Ashford College, The Coachworks, Tales from the Track and Ashford Model Railway Club to stage a programme of events and activities to mark the celebrations. 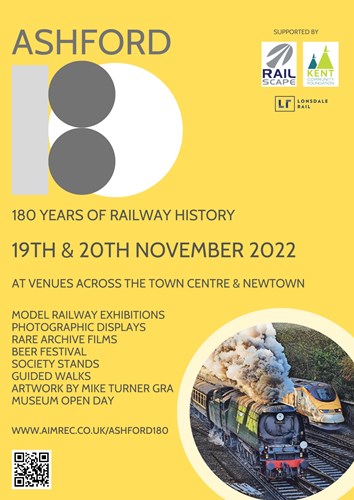 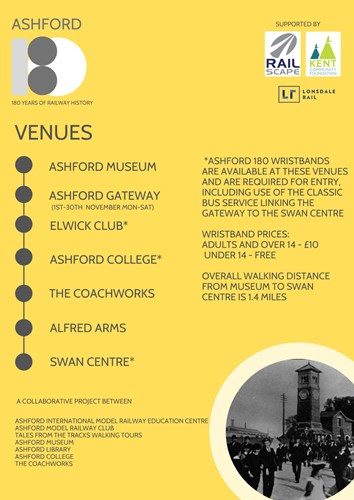 Photographic Exhibition from 1 - 30 November featuring exhibits by the Railway Photographic Society from the NRM Shildon "Rail Cameramen" Exhibition, alongside Railway Scenes of Ashford from the 1940s to the present day captured by local photographers.

Two floors of model railways curated and mostly built by AIMREC's volunteer team including first time layouts built by the Saturday morning group of younger model makers, new layouts celebrating the classic years of Tri-ang and Hornby Dublo as well as a recreation of Lenham Station. Special guests are also bringing layouts to inspire and entertain.

Displays on the history of Newtown, Ashford's own model village for workers, compiled by Ann Austin of Tales from the Tracks, who will also be giving guided walks of the Newtown area.

A classic Volvo B10M PS coach* normally based at the East Kent Railway will provide a regular service linking the venues helping people who might otherwise have difficulty covering the 1.4-mile distance.

Venues marked * require a wristband for entry and are available at the venues. Wristband prices are adults and over 14 - £10, under 14 - free.

For more details about the Ashford 180 celebrations visit the AIMREC website. 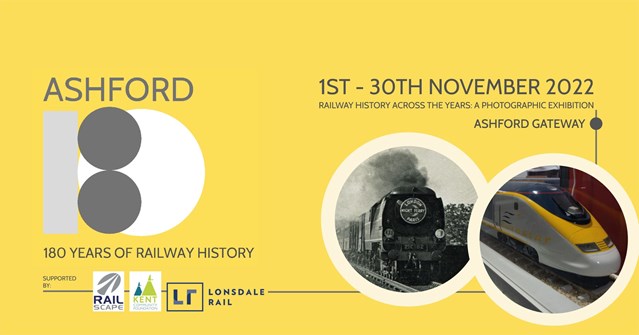