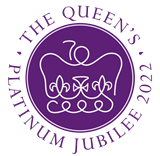 This year, 2022, Her Majesty the Queen became the first British Monarch to celebrate a Platinum Jubilee, 70 years of service, having ascended to the throne on 6 February 1952.

The extended bank holiday, from Thursday 2 to Sunday 5 June, was the opportunity for communities to come together to celebrate the historic milestone.

Ashford Borough Council organised a long weekend of celebrations and commemorations to mark The Queen’s Platinum Jubilee and the 80th Anniversary of HMS Albacore, Warship Week and the Ashford Sea Cadets.

Video of some of our images from the Platinum Jubilee weekend below:

Lighting of the Civic Memorial Beacon

Ashford Borough Council was one of 1,500 Platinum Jubilee Beacons lit in towns, cities, and villages, from all four corners of the United Kingdom, Channel Islands, Isle of Man and Commonwealth to mark the Queen's Platinum Jubilee. Civic Park was lit in celebratory colours, with pre-recorded music and live performances from Ashford Vision Signing Choir and Ashford Residents Jenny Bailey and Chris Symons who wrote 'It Matters to Me' the Ark 2030 Anthem. The public added their good-will wishes to the Queen on the Jubilee Blossom tree, which is central to the Ashford Tree Trail.

Download the lyrics for It Matters To Me PDF [pdf] 111KB

The Mayors Thanksgiving Service for her Majesty the Queen

A community celebration took place, in music and words to mark the Queen's Platinum Jubilee. All seven decades of the Queen's reign were featured, including music sung at the Queen's coronation on 2 June 1953 and the words of Sir John Betjemen. Local choirs from the Ashford borough performed, including Ashford Invicta Singers and young people from St Mary's Primary School; who also performed 'It Matters to Me'.

To find out more head to the HMS Albacore and the Ashford Sea Cadets webpage on our website. 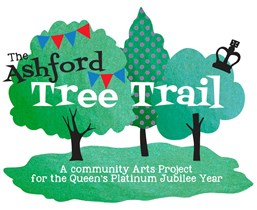 You can now view a gallery of pictures of trees that have been submitted online by organisations and members of the community.

You can make your own tree and decorations at home!

The free activity pack to get you started is available to download here Ashford Tree Trail Activity Pack [pdf] 20495KB.

You could also use our free Jubilee colouring pages for kids.