2022 marked the 80th anniversary of HMS Albacore and the Ashford Sea Cadets. Ashford Borough Council hosted programme of events to celebrate this anniversary.

We welcomed the local community to the 80th Anniversary of the HMS Albacore and the Ashford Sea Cadets celebrations. The commemorative service and unveiling of the new dedicated memorial for HMS Albacore, took place at Memorial Gardens, Ashford town centre, on Saturday 4 June.

The service was led by the Chaplains of both the Ashford Sea Cadet and Mayor Elect which included the ceremonial presentation of the new HMS Albacore flag to the Mayor. Ashford Sea Cadet band played before and during the ceremony with a repertoire of music from the seven decades of the Queen’s reign. The Captain of the Sea Cadets, Captain Neil Downing RN attended on behalf of both the Sea Cadet Corps and the Royal Navy, whereby Captain Neil Downing RN and the Mayor inspected the platoon of cadets before the service.

(Pictured below) the unveiling ceremony in Memorial Gardens for the 80th anniversary of HMS Albacore and the Ashford Sea Cadets. Images courtesy of Leanne Smith. 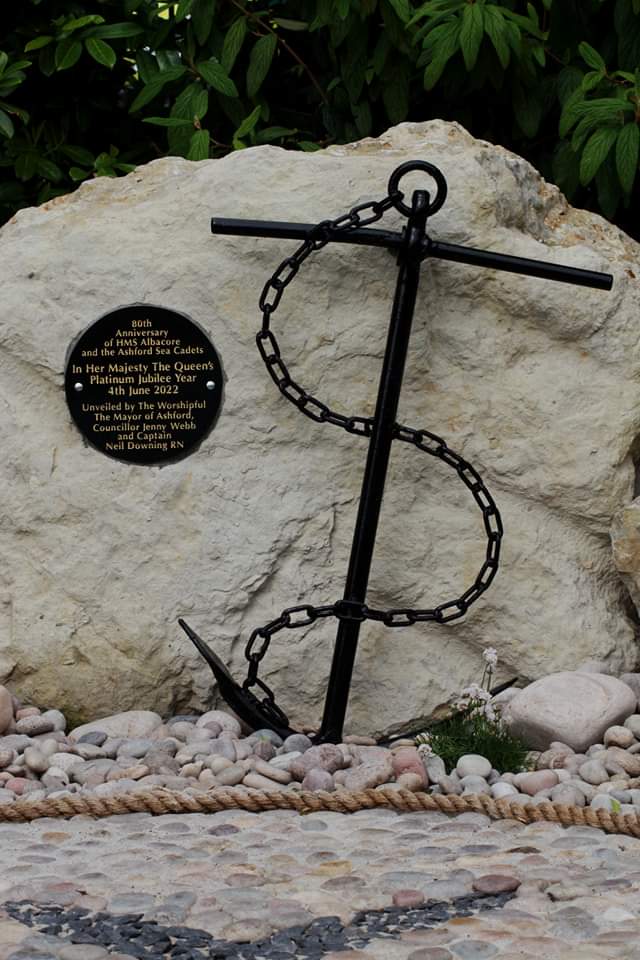 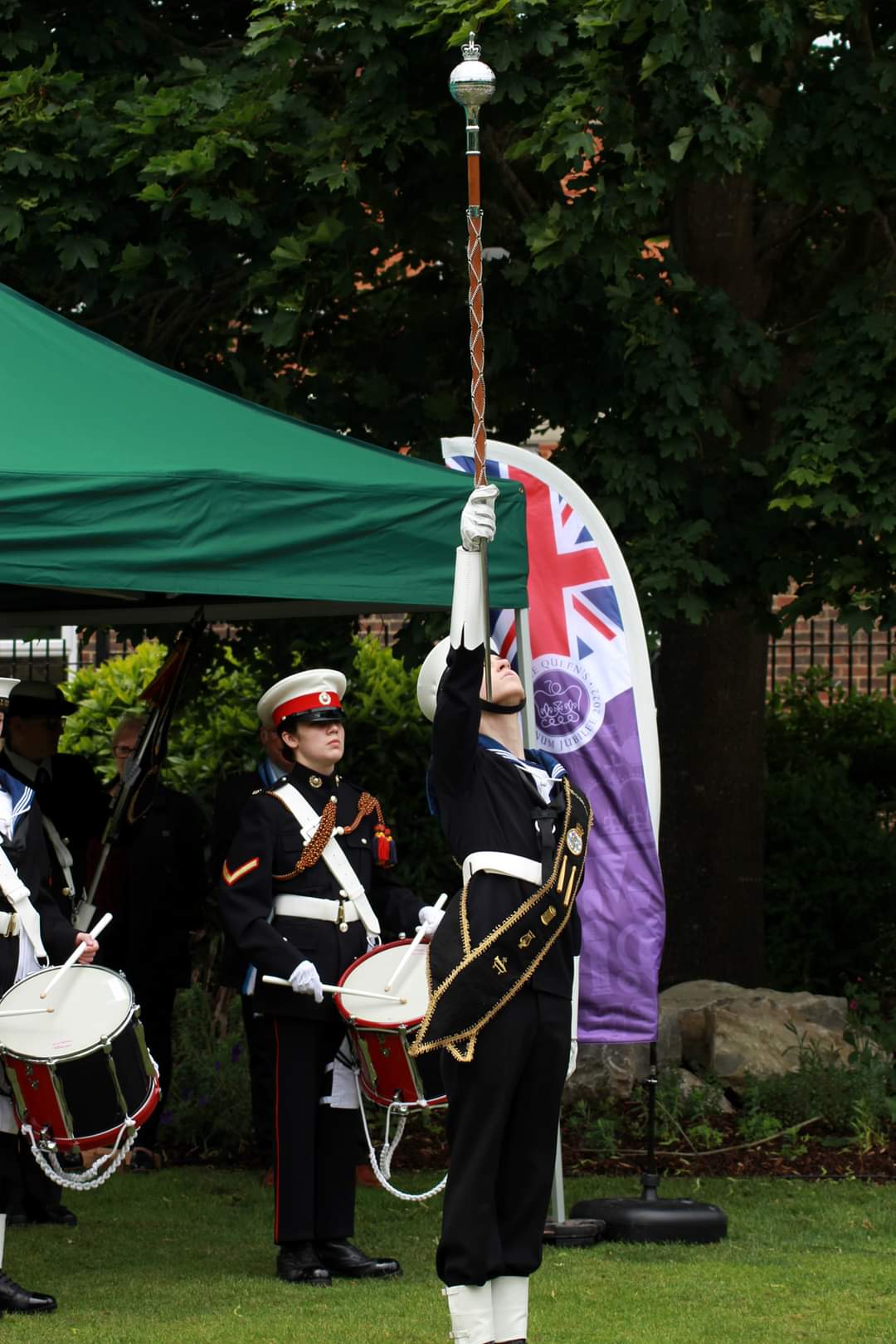 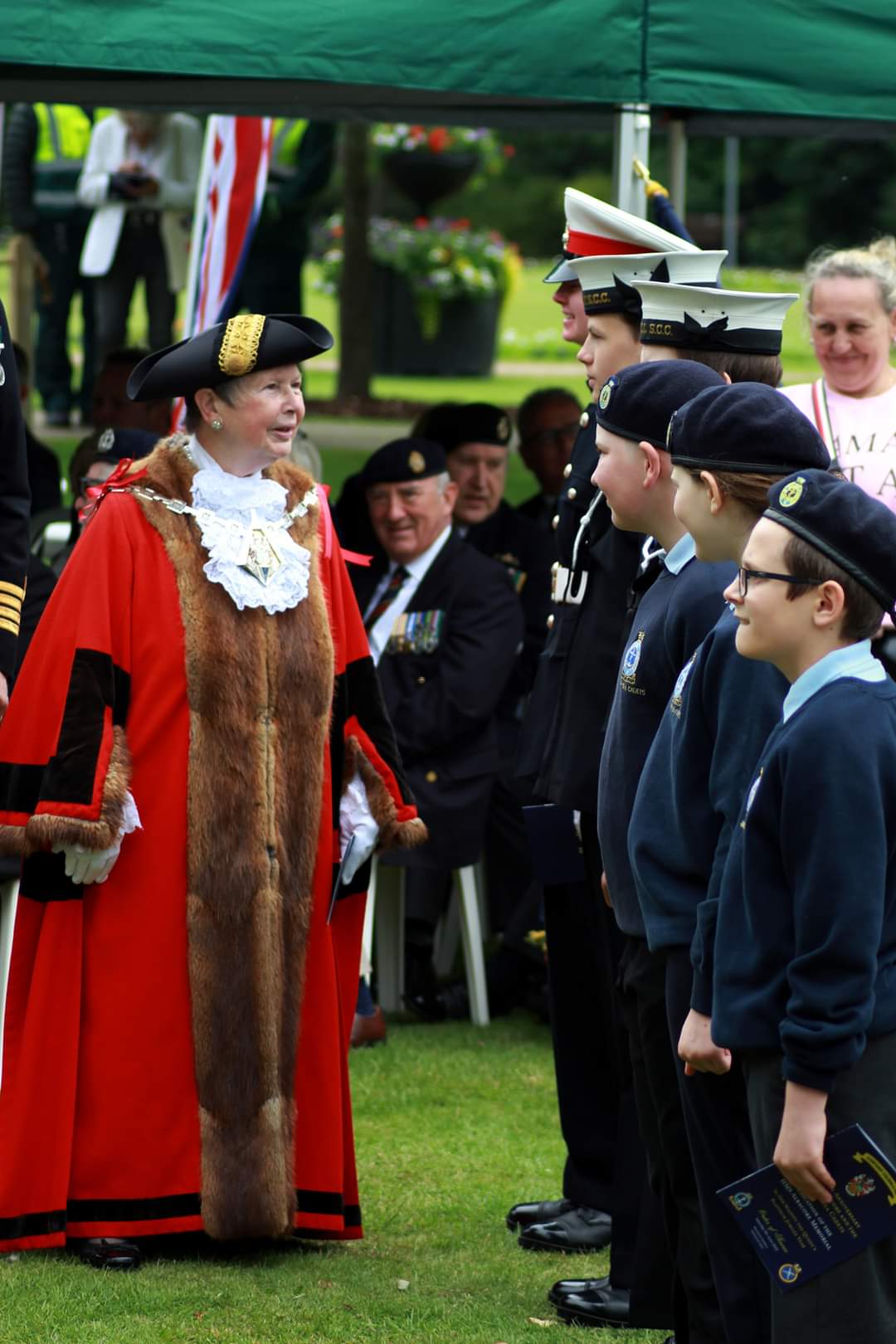 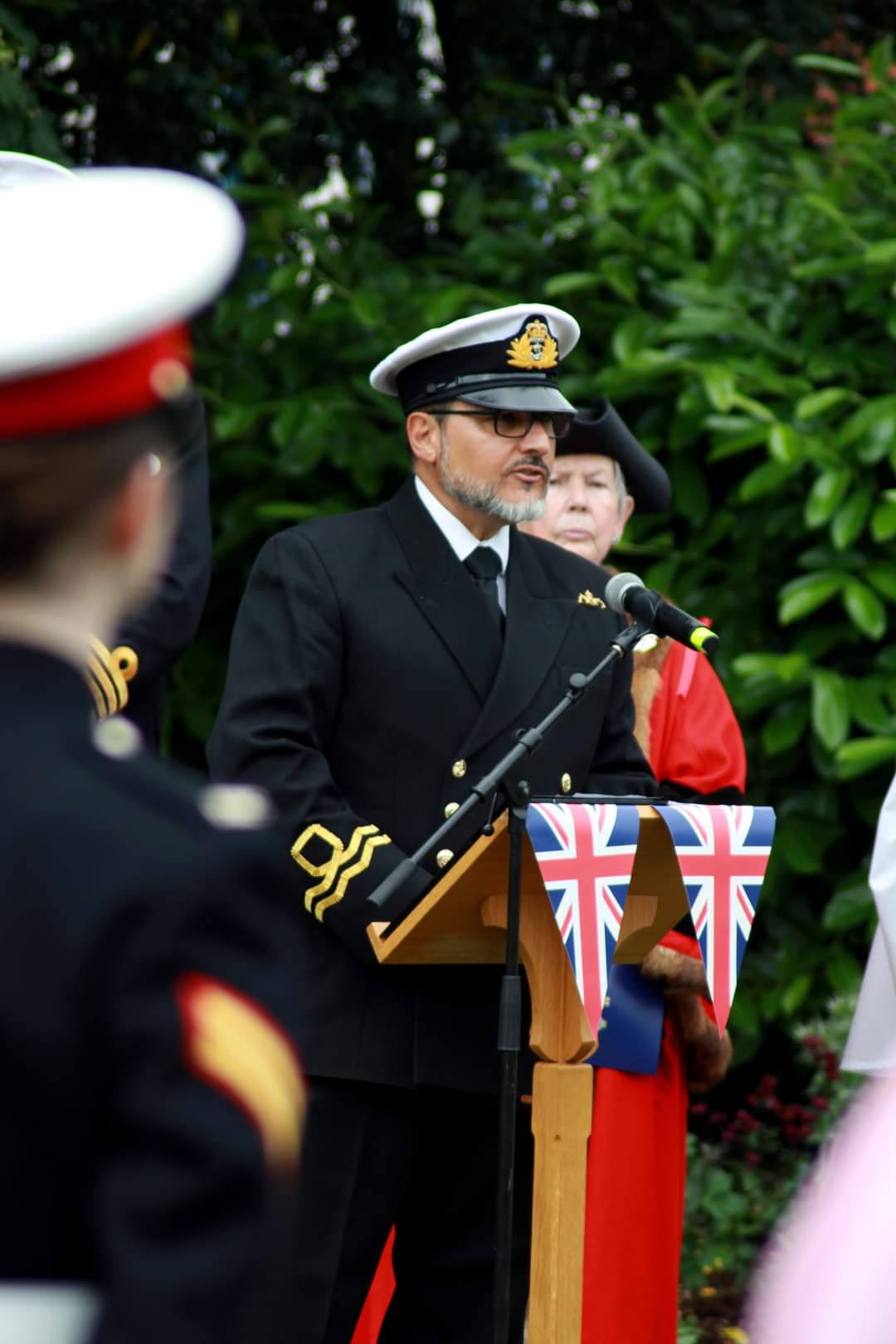 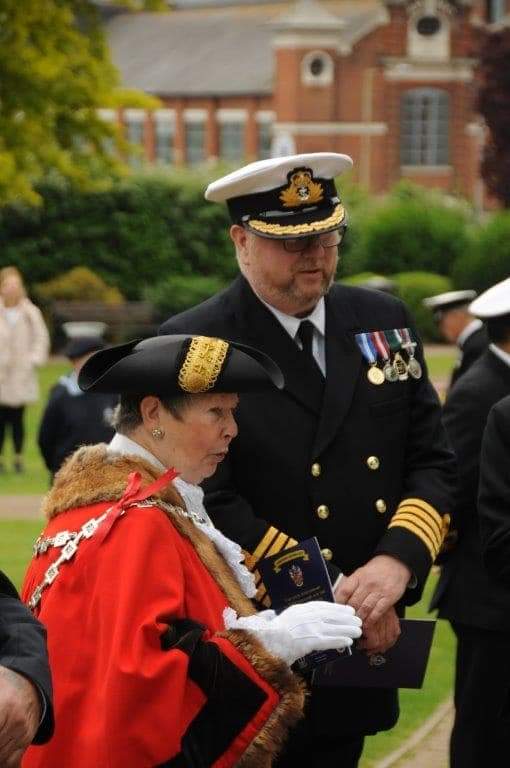 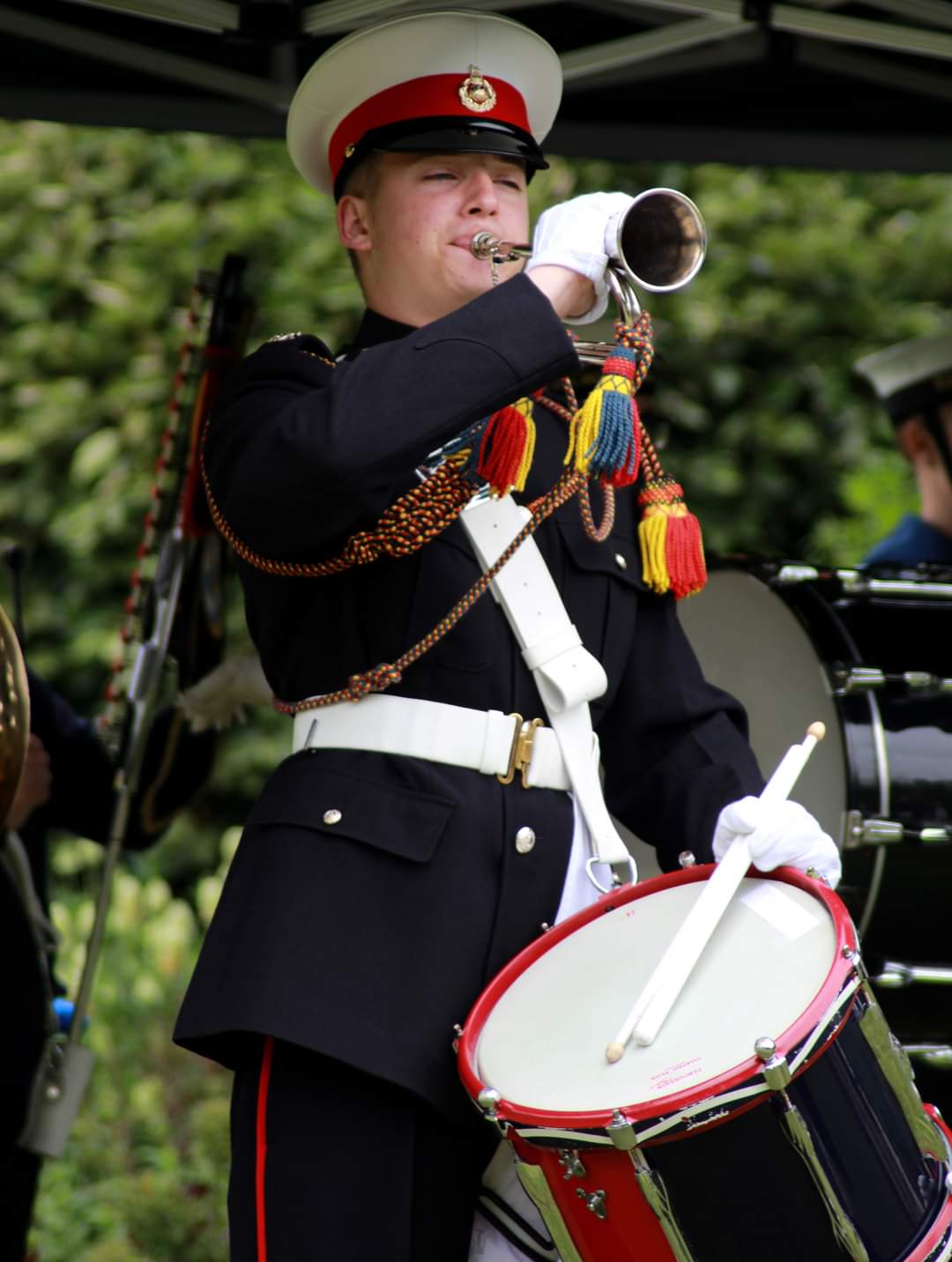 Ashford’s Warship Week was held in the Corn Exchange where broadcast messages were sent via the BBC to HMS Albacore.

The first recording was the “Palais Glide Dance” “All the nice girls love a sailor” during which there were shouts from the crowd present “Hello Albacore”. The speakers proceeded to the stage moving between a Guard of Honour formed by Ashford Sea Cadets.

The opening message came from Alderman Edward Hardy the Chairman of Kent County Council who said “We are doing our best to back up your efforts to protect our shipping, by growing increased amounts of food in the fields and gardens of Kent. To-night on behalf of Kent people everywhere I wish all aboard good luck and good hunting”.

Mrs. D Williams, wife of the ship’s Commander spoke on behalf of the wives and families of the ship’s crew. “We send you our loving thoughts and hope that you will soon come home. Sometimes we may be a little anxious but we are keeping our chins up and know that you will be back safely when you have finished the job. To my husband” she concluded “To the Ward room and to the Mess Decks I wish you good luck and a happy return”.

Next came Mrs. E Jell from Great Burton Farm, Kennington, the mother of Telegraphist Seaman D Jell on the Albacore. “We miss you very much and your mechanical stunts. The kitchen never looks like a workshop now, and the wireless is never in pieces. Everyone at home sends their love”.

Mr C. Winchester described one of the “Albacore stunts” which have been arranged for the benefit of the crew. He hoped that they would come to Ashford after the war along with their band.

Next came Mrs. Peggy Rowsell who sent a Christmas parcel to the “Sailor with the deepest blue eyes”.  She spoke on behalf of the people of Ashford. “Our thoughts and prayers are always with you”. She invited the men to send letters and come to Ashford when they were in port. She concluded by wishing all the crew “Good luck with 1943”. 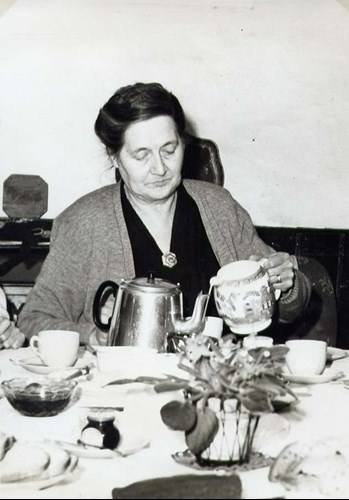 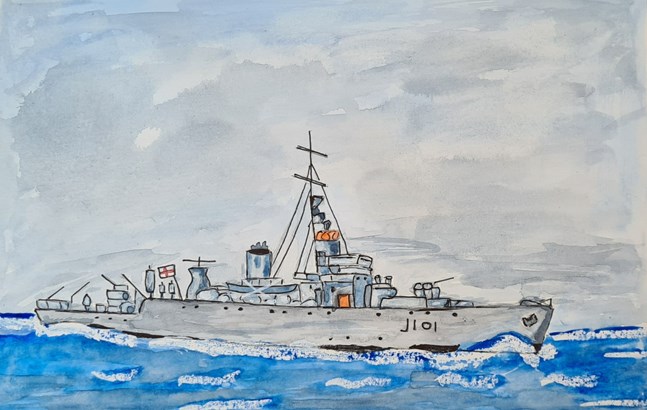 (Above) Painting of HMS Albacore by the Reverend Dr Sue Starkings. 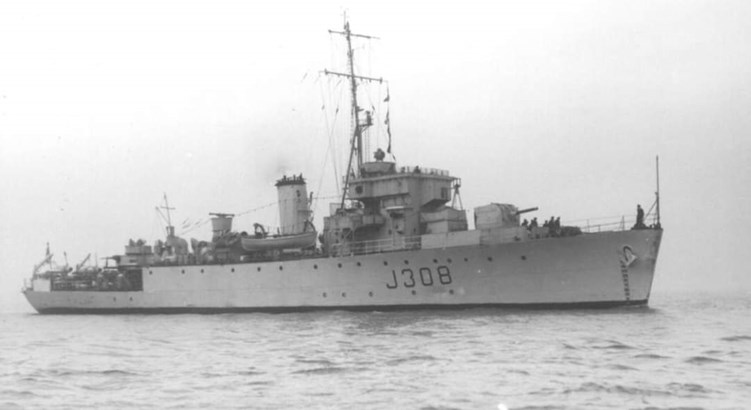 Page 2 of 3
Next Page > < Previous Page
Also in this section
The Ashford Tree Trail
Ashford Borough Jubilee 2022: a thank you to the Queen on Film
Your Council
Transparency
Contact Us
Working for Us
Consultations
Conditions of Use