On Friday 25 November, the delivery team for Ashford International Studios in Kent brought Ashford MP Damian Green, key Whitehall officials and other stakeholders up to date on a landmark project, granted planning approval in September 2020, that will deliver £250 million of investment and circa 2,000 jobs for the region.

Starting at the nearby McArthurGlen Ashford Designer Outlet, the event revealed the significant progress achieved over the past year since the successful bid by Ashford Borough Council for £14.7 million in Levelling Up Funding, that has allowed vital enabling works to take place.

After refreshments and networking, guests relocated to the former Victorian railway site at Newtown Works to see for themselves the scale and ambition of a key strategic project providing new purpose for 37,192 m2 of Grade II listed buildings and surrounding former railway land, left empty since the 1980s.

Mark Quinn, CEO and Chairman of Quinn Estates, said: “Ashford International Studios is one of Kent’s most highly anticipated projects so it is fantastic to be taking it forward. The opportunity it presents in terms of job creation, skills growth and regeneration is phenomenal. We are extremely privileged to be involved in creating a lasting legacy for a site of such historical significance that has sat as one of the south-east’s largest brownfield sites for several decades. We look forward to progressing a project, which will be of huge benefit to local people.”

Cllr Gerry Clarkson, Ashford Borough Council Executive Leader, said: “This will be one of the most important economic drivers for the borough in the next few years, which is why it is one of our Super Six strategic projects and a key part of our Corporate Plan. 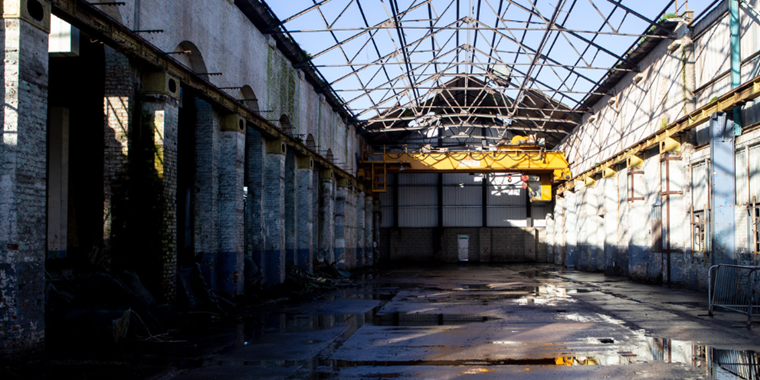 “These exciting proposals involve finding a new use for one of the longest listed buildings in the country, which is of significant historical value but has been left to decay. This development will sensitively ensure our proud railway heritage is recognised, while transforming a brownfield site which has laid dormant for many years into a Film and TV Studio hub together with a hotel, serviced apartments, conferencing facility and a health club.

“Not only will this put Ashford on the map nationally and internationally, it will also create sought after film studio space, provide thousands of jobs and make the town a hub for the creative arts industry, which is set to grow significantly in the future.”

“Since then, a huge amount of work has gone on behind the scenes and recently we have appointed a range of technical experts as we approach a really exciting stage of the project. Enabling works are already well underway on site and I look forward to seeing the development rise from the ground over the coming years.

“My fellow directors and I realise the great responsibility as well as a great privilege of delivering this project for the residents of Ashford and the wider international community.”

Ashford MP, Damian Green, said: “This exciting project is not only good for our local economy and the job prospects of many Ashford people, it is a great example of local and national Government working together. The Government has provided Levelling Up funds which have helped the council and the developers get to this stage, and we will all benefit from this collective effort.”

Graham Razey, Chief Executive Officer for EKC Group, said: “Our Group of Colleges has always prided itself on its collaborative work with businesses, ensuring that local economies have the skills they need to continue to flourish and grow. This new development provides an exciting opportunity for us to further this work, growing the next generation of creatives, with courses across a range of exciting creative curriculum that could help Ashford borough become the go-to destination for the creative arts. It’s wonderful to see this project get underway as it could promise a really exciting future for the whole of the community.”

A significant amount of enabling and infrastructure works have already been undertaken with full construction scheduled to start on the site at Newtown Works in summer 2023. The residential element of the project, consisting of around 300 high-quality homes created within the 37,179m2 of Grade II Listed buildings, is on target to be completed by July 2025.

To find out more about the proposals visit: the Ashford International Studios website.