Ashford's motto is With Stronger Faith. This is a phrase adapted from Richard Lovelace's poem Lucasta, Going to the Warres. Lovelace was a 17th Century Cavalier poet from the village of Bethersden. 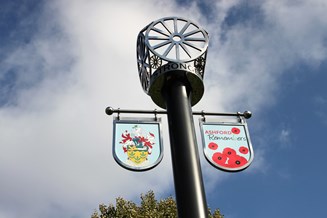 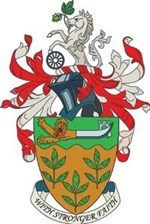 The phrase represents the aspirations and determination of the council. This is also reflected on the town centre bandstand and the new Civic Beacon, which was unveiled in Civic Park (previously known as North Park) in 2018.

The Civic Beacon is a memorial dedicated to Richard Lovelace and his connection with Ashford. The beacon also represents civic pride. It is a monument that can be used to bring people together to celebrate or to remember past events.

The borough arms was designed to symbolise the general character of the district.

The shield has a gold background, which signifies the richness and fertility of the garden of England. The three sprigs of ash represent the three former Ashford areas – East Ashford Rural, West Ashford Rural and Ashford Urban. Each sprig has five leaves to represent the five areas that make up the borough of Ashford. This includes Tenterden Rural District and the old borough of Tenterden, in addition to the three Ashford areas.

A wavy line borders the top of the shield to represent the rivers of the area – the Stour, Rother and Beult.

A closed helm proper to civic arms with a twisted crest-wreath and decorative mantling/tournament cloak sits above the shield. These are coloured white and red, which are the colours of the Kent County Council shield and of the device of Ashford Urban District Council. The field of the Tenterden arms is also red.

The wreath has a crest that represents the main industries in the borough. The white horse of Kent has a leaved hop-cone in its mouth. It also has the driving wheel of the locomotive Invicta on one of its hooves. This wheel was also featured on the Ashford Urban District Council device.

Two local silversmiths, Andrew Bray and Robin Beresford, designed and made Ashford's civic regalia in 1974. These items are made up of:

All of the pieces are hand made in sterling standard silver, parcel gilt and leather. The design reflects the unity of the former five urban and rural districts to form the present borough council.

The regalia was commissioned by the following individuals and businesses:

*The Mayor is provided with two Jabots – these vary in style and the Mayor can choose which one to use.

Ashford has strong links with mainland Europe and the USA through its twin towns. These are: Bad Münstereifel in Germany, Fougères in France, and Hopewell, Virginia, USA.

Ashford has had links with Bad Münstereifel since the early 20th Century. However, twinning didn't take place until 26 August 1964.

The Fougères connection began with a liaison amicale in 1978. This was followed by an official ceremony in 1984.

The link with Hopewell began on 16 April 1994. it was marked at a ceremony in Virginia where the Mayors of Ashford and Hopewell recognised the historic relationship between the two communities. A concordat was established before the twinning took place in 1999.

The Ashford Twinning Association organises visits both to and from Bad Münstereifel and Fougères. These take place throughout the year. They are always pleased to introduce people to Ashford's European twin towns.

The Friends of Hopewell Association has created one of the strongest links between any two communities separated by the Atlantic Ocean.