What is Holocaust Memorial Day?

27 January is the day for everyone to mark Holocaust Memorial Day (HMD) by remembering the millions of people murdered in the Holocaust, under Nazi Persecution and in the subsequent genocides in Cambodia, Rwanda, Bosnia and Darfur. 27 January also marks the liberation of Auschwitz-Birkenau, the largest Nazi death camp. On HMD we honour the survivors of these regimes and challenge ourselves to use the lessons of their experiences to inform our lives today.

On HMD you will be joining thousands of others who come together at activities all over the UK to learn the lessons of the past and recognise that genocide does not just take place on its own - it’s a steady process which can begin if discrimination, racism and hatred are not checked and prevented. We’re fortunate here in the UK; we are not at immediate risk of genocide. However, discrimination has not ended, nor has the use of the language of hatred or exclusion. There is still much to do to create a safer future and HMD is an opportunity to start this process.

The 10 stages of Genocide

Genocide never just happens. There is always a set of circumstances which occur or which are created to build the climate in which genocide can take place.

Gregory H Stanton, President of Genocide Watch developed the 10 stages of genocide which explains the different stages which lead to genocide.  At each of the earlier stages there is an opportunity for members of the community or the International Community to halt the stages and stop genocide before it happens.

The differences between people are not respected. There’s a division of ‘us’ and ‘them’, which can be carried out using stereotypes, or excluding people who are perceived to be different.

This is a visual manifestation of hatred. Jews in Nazi occupied Europe were forced to wear the yellow Star of David. In Cambodia the Khmer Rouge forced people from the Eastern Zone to wear blue scarves. From 1991, in north-west Bosnia, all non-Serbian citizens were forced to wear white armbands.

The dominant group denies civil rights or even citizenship to identified groups. The 1935 Nuremberg Laws stripped Jews of their German citizenship, made it illegal for them to do many jobs or to marry German non-Jews.

Those perceived as ‘different’ are treated with no form of human rights or personal dignity. During the Genocide in Rwanda, Tutsis were referred to as ‘cockroaches’; the Nazis referred to Jews as ‘vermin’.

Genocides are always planned. Regimes of hatred often train those who go on to carry out the destruction of a people. The Sudanese Government supports and arms the Janjaweed (Arab militia) in Darfur to carry out the violence and killings.

Propaganda begins to be spread by hate groups. The Nazis used the newspaper Der Stürmer to spread and incite messages of hate about Jewish people.

Perpetrators plan the genocide. They often use euphemisms such as the Nazi’s phrase ‘The Final Solution’ to cloak their intentions. Acts of genocide are disguised as self-defence if there is an ongoing armed conflict or civil war, such as in Bosnia.

Victims are identified because of their ethnicity or religion and death lists are drawn up. People are sometimes segregated into ghettos, deported or starved and property is often expropriated. Genocidal massacres begin.

The hate group murders their identified victims in a deliberate and systematic campaign of violence. Millions of lives have been destroyed or changed beyond recognition through genocide.

The perpetrators or later generations deny the existence of any crime. Evidence is destroyed and witnesses are intimidated. There has been an increase in Holocaust denial online in recent years. 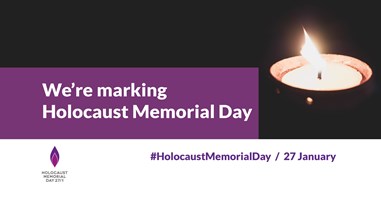 Each year Holocaust Memorial Day takes on a new theme. The theme for HMD 2022 is ‘One Day’. Holocaust Memorial Day is One Day, 27 January that we put aside to come together to remember, to learn about the Holocaust, Nazi Persecution and the genocides that followed in Cambodia, Rwanda, Bosnia and Darfur, in the hope that there may be One Day in the future with no genocide. We learn more about the past, we empathise with others today, and we take action for a better future.

Below you can view the virtual exhibition exploring the theme of ‘One Day’.

To mark the 80th anniversary of the Association of Jewish Refuges (AJR) launched a special project, ‘80 Trees for 80 Years’ that sees 80 native oak trees planted in Britain to honour the people and places that symbolise the enormous contribution made to every walk of British life by refugees who escaped from Nazi Europe.

Ashford Borough Council was honoured to be invited to take part in this special tree planting and the village of Woodchurch was selected as a location due to its contribution in welcoming Jewish refugee children during the Second World War.

In the 1930s, 70,000 refugees, including approximately 10,000 children on the Kindertransport (German for children’s transport) arrived in Great Britain from Nazi-occupied Europe. Following an advertisement in the London Times, Great Engeham Farm in Woodchurch was established in June 1939 for housing Jewish refugee children.  Combining productive agriculture training with education, Great Engeham Farm gave many young Jewish refugees a purpose and occupation.  Some 300-350 children aged 13-16 passed through the camp before moving to Devon in November 1939, when Kent was designated off-limits to enemy aliens.

The tree at Woodchurch was sponsored by Margot Fraser, an AJR member and will act as a platform for telling the story of Britain’s Jewish refugees and celebrating their remarkable contribution to British life.  It will also form part of The Queen’s Green Canopy, the unique tree planting initiative which will mark Her Majesty’s Platinum Jubilee in 2022. 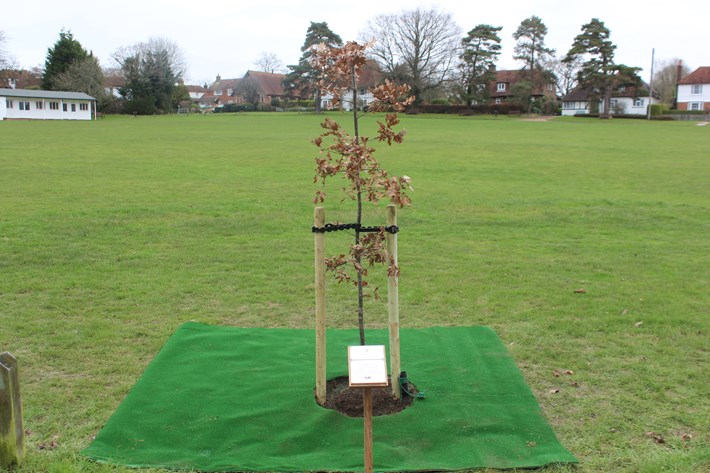 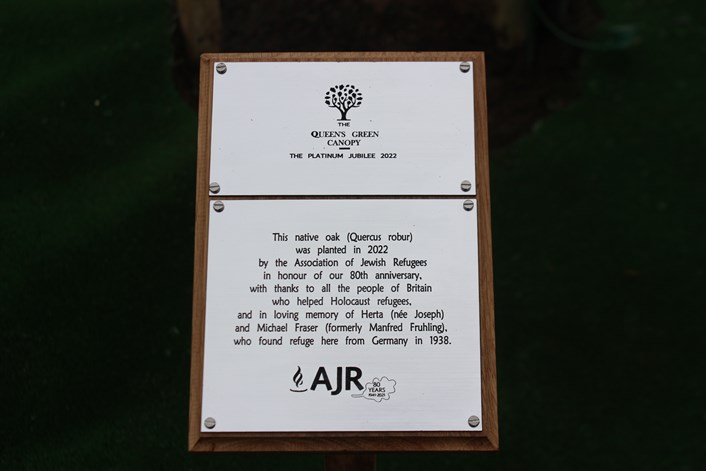 The above images show the native oak tree and plaque that was planted on Holocaust Memorial Day 2022 in Woodchurch as part of the 80 Trees for 80 Years project. 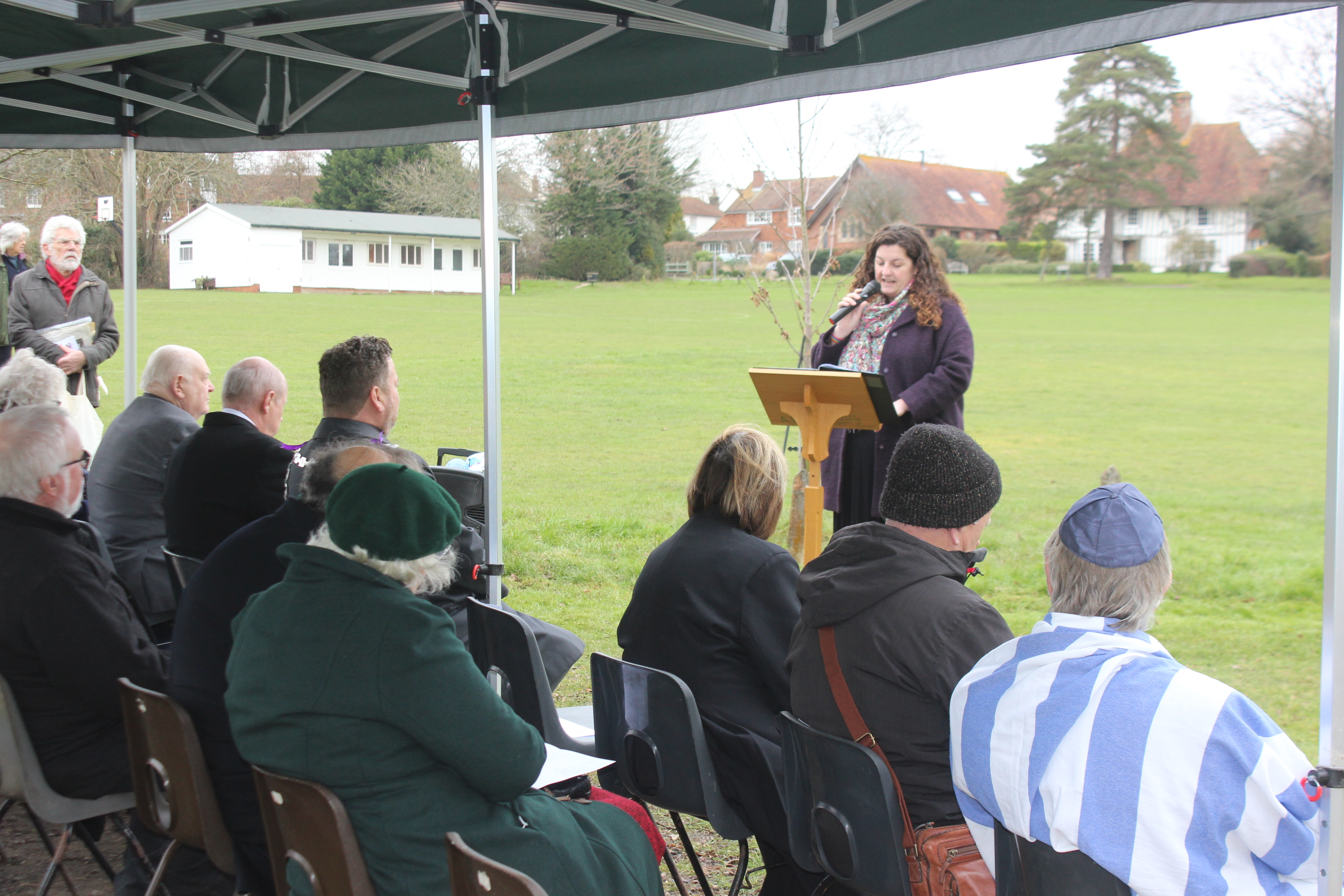 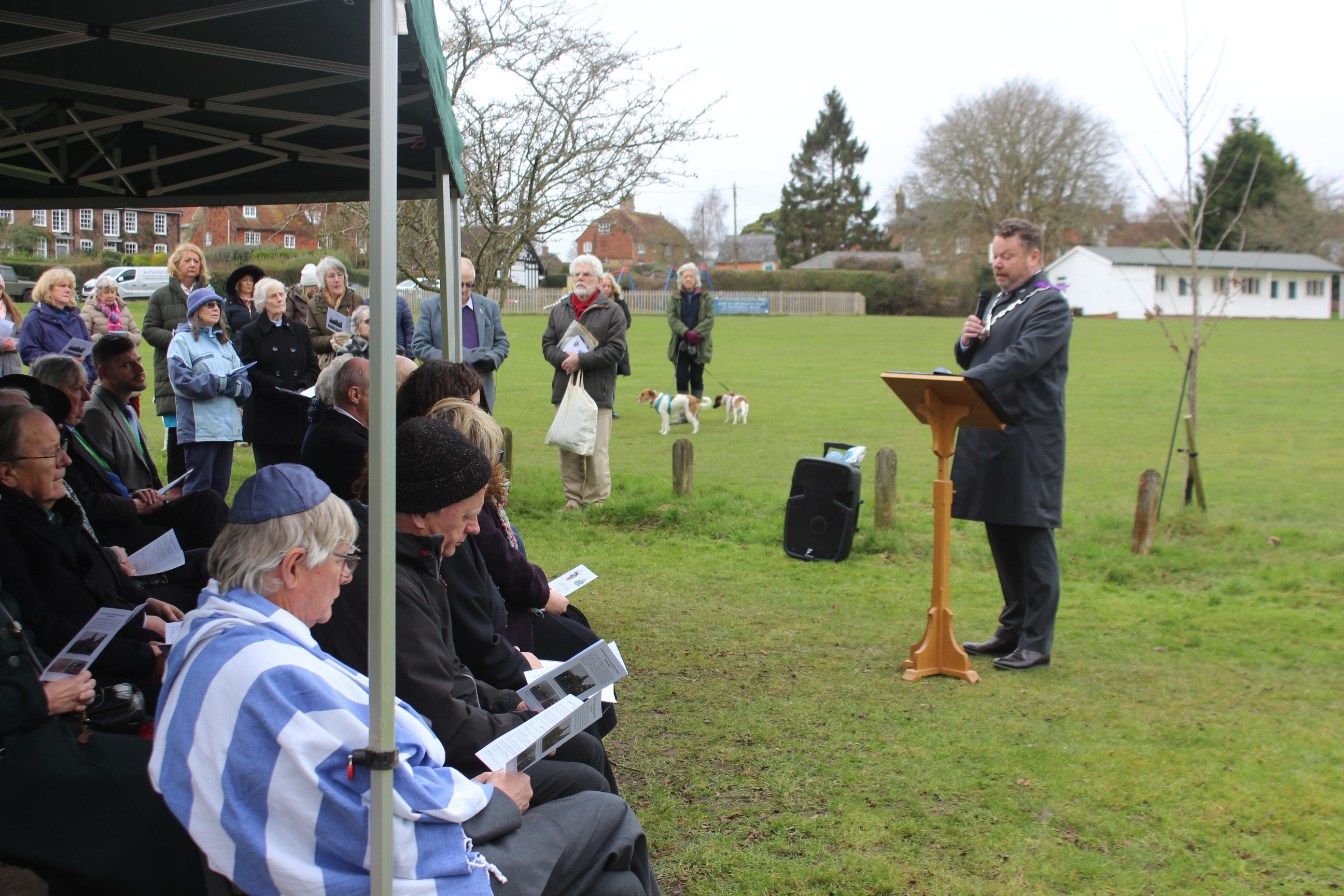 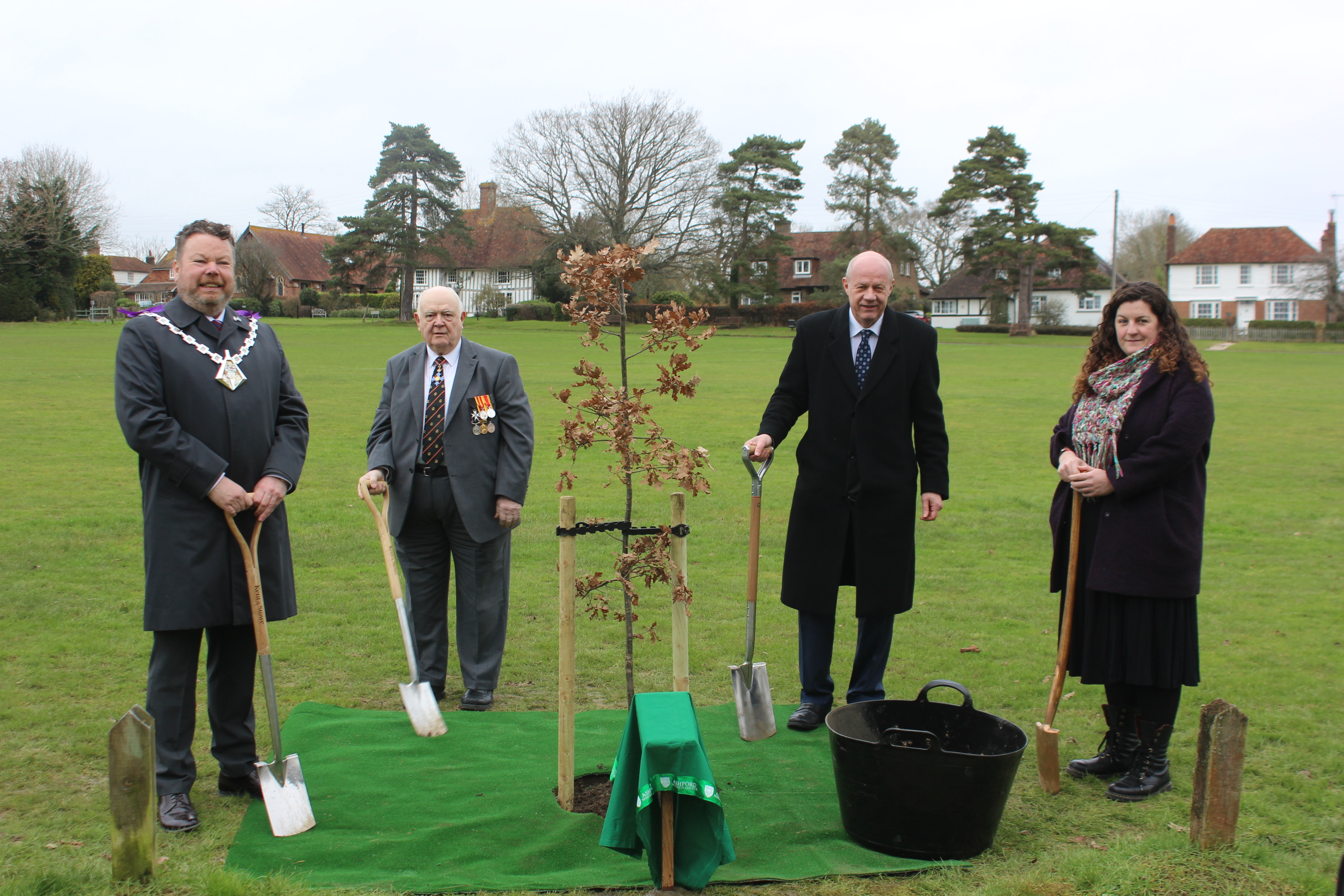 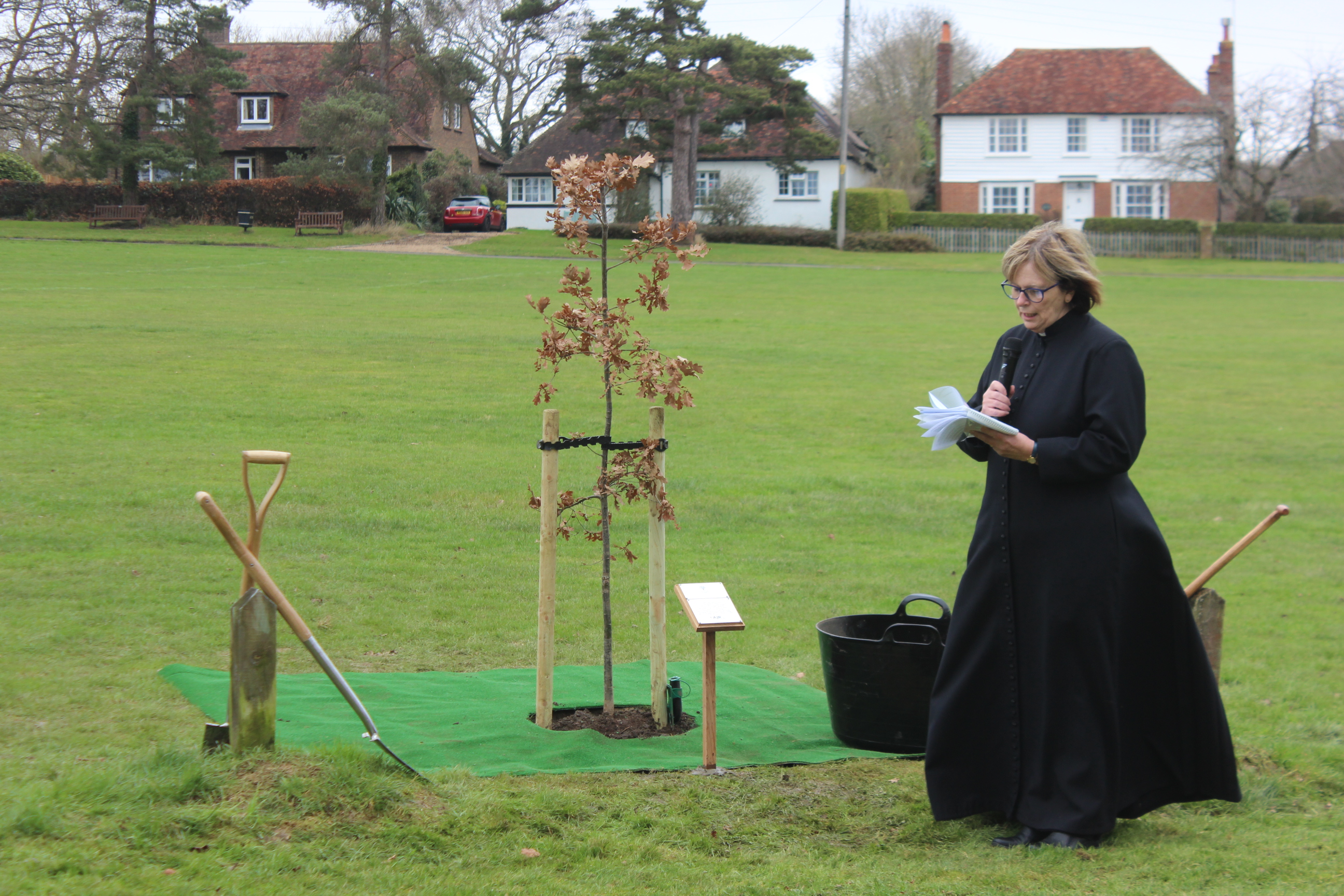 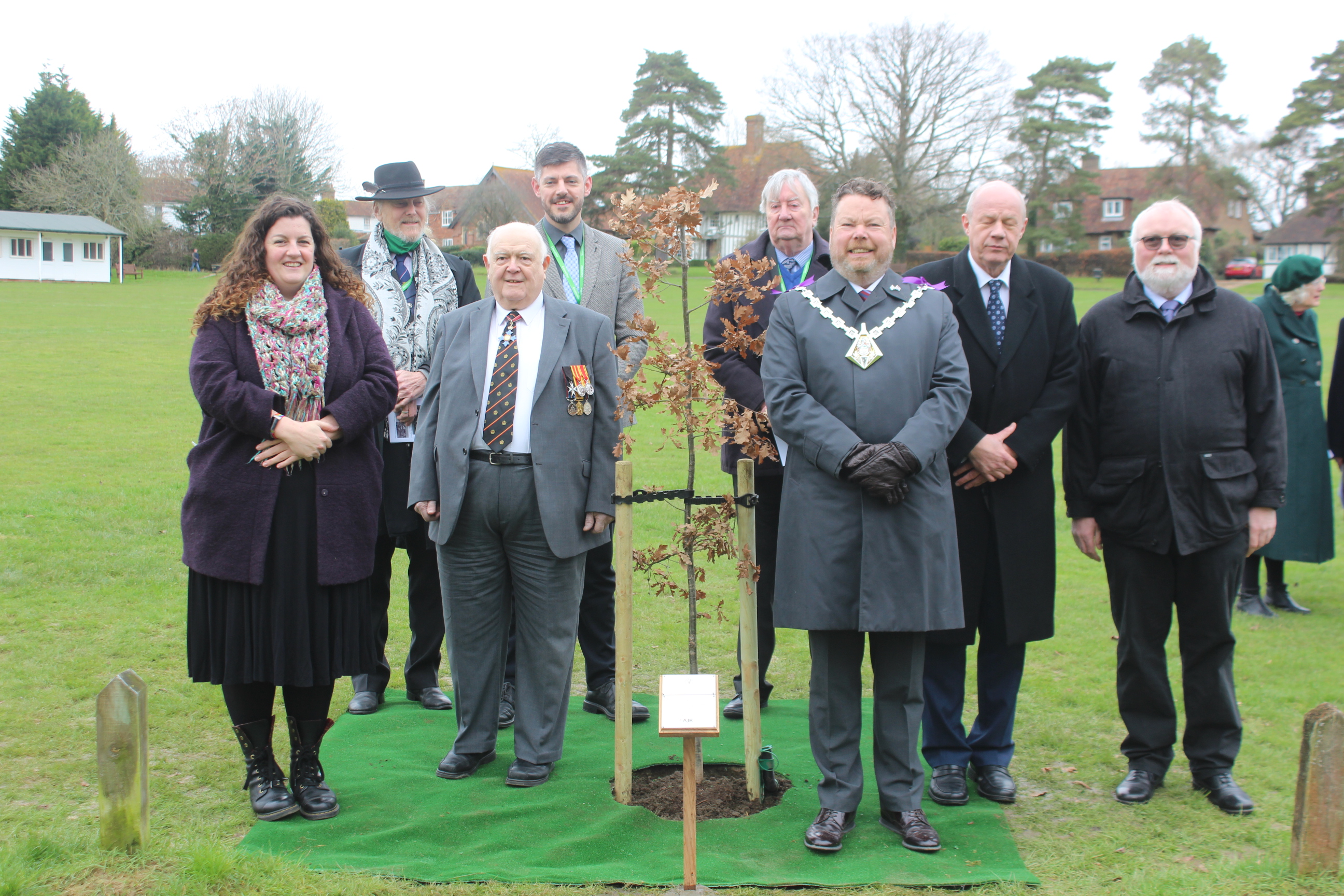 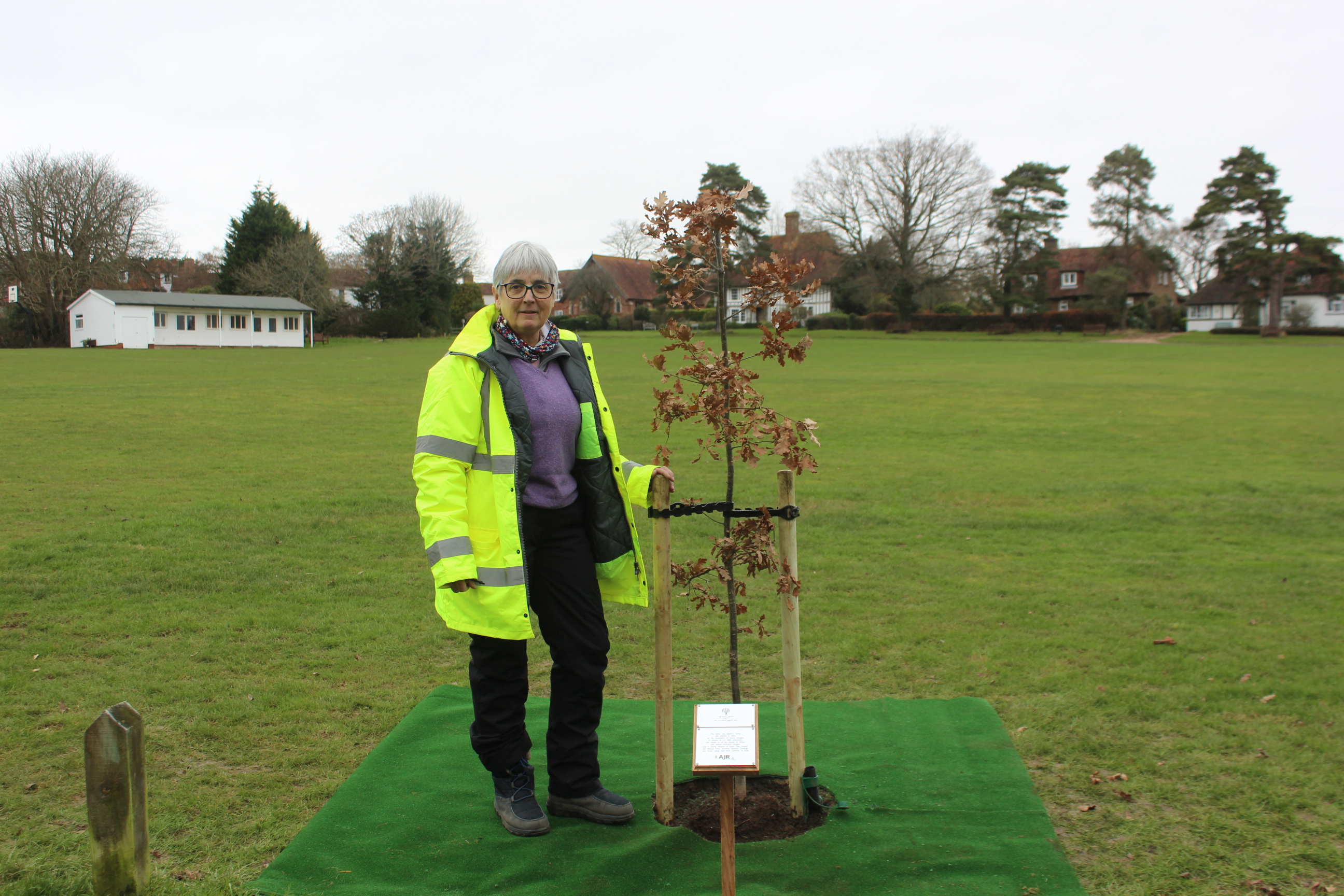 Ashford Memorial Gardens is an area of remembrance for those that lost their lives in conflict at home and around the world.

The Memorial Gardens also houses the Anne Frank Memorial Tree planted on 11 June 1999 to commemorate Anne Frank and all other children killed in wars and conflicts in the 20th century.

Anne Frank (1929-1945) was a young Jewish girl of German-Dutch descent.  Her parents moved to the Netherlands from Germany shortly after Adolf Hitler came to power and made life increasingly difficult for Jews.  In 1942, Frank and her family went into hiding in a secret compartment behind her father’s business in German-occupied Amsterdam.  They lived in constant fear of being discovered and Anne kept a diary in which she recorded her observations and feelings about the war, humanity and her own identity.

"It's utterly impossible for me to build my life on a foundation of chaos, suffering and death. I see the world being slowly transformed into a wilderness. I hear the approaching thunder that will one day destroy us too. I feel the suffering of millions... In the meantime I must hold onto my ideals. Perhaps the day will come when I'll be able to realise them."

Anne Frank’s Diary 15 July 1944 (inscribed on a plaque next to the Anne Frank Tree).

The plaque next to the Anne Frank Memorial Tree in Memorial Gardens, Ashford, was replaced on 27 January 2001 to mark Holocaust Memorial Day.  It was sponsored by Ashford Borough Council and arranged by the Anne Frank Education Trust UK.

This year, during the afternoon of Holocaust Memorial Day, The Mayor of Ashford visited the Anne Frank Tree in Memorial Gardens. Here a posy was laid whilst sharing a moment of reflection. 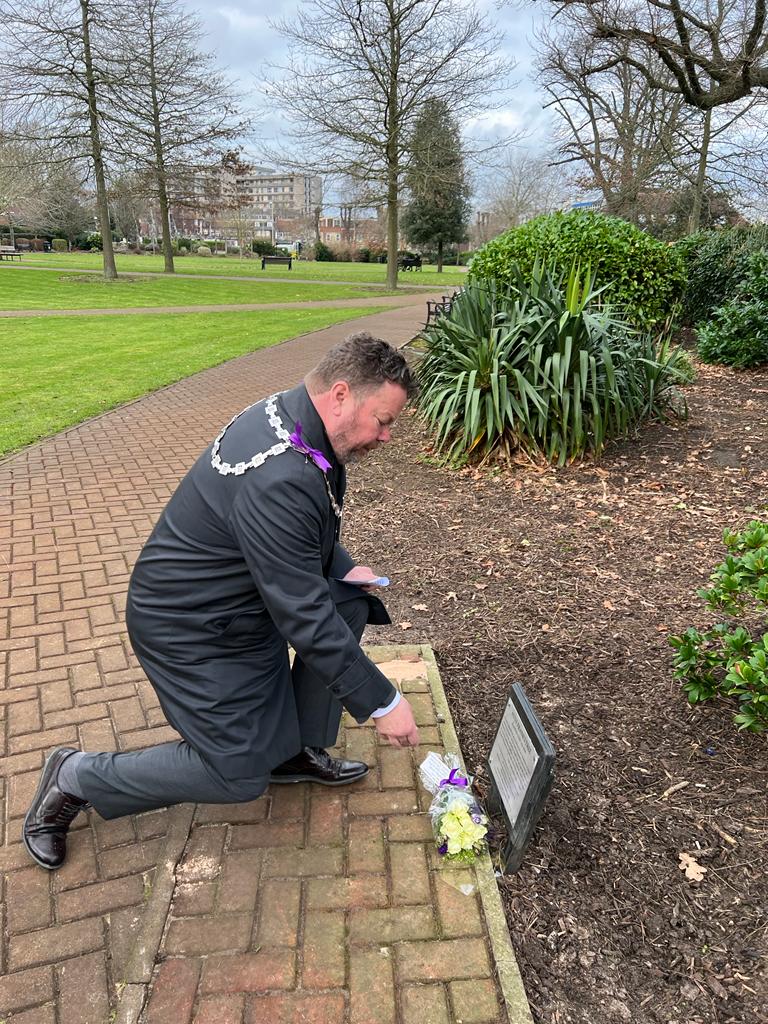 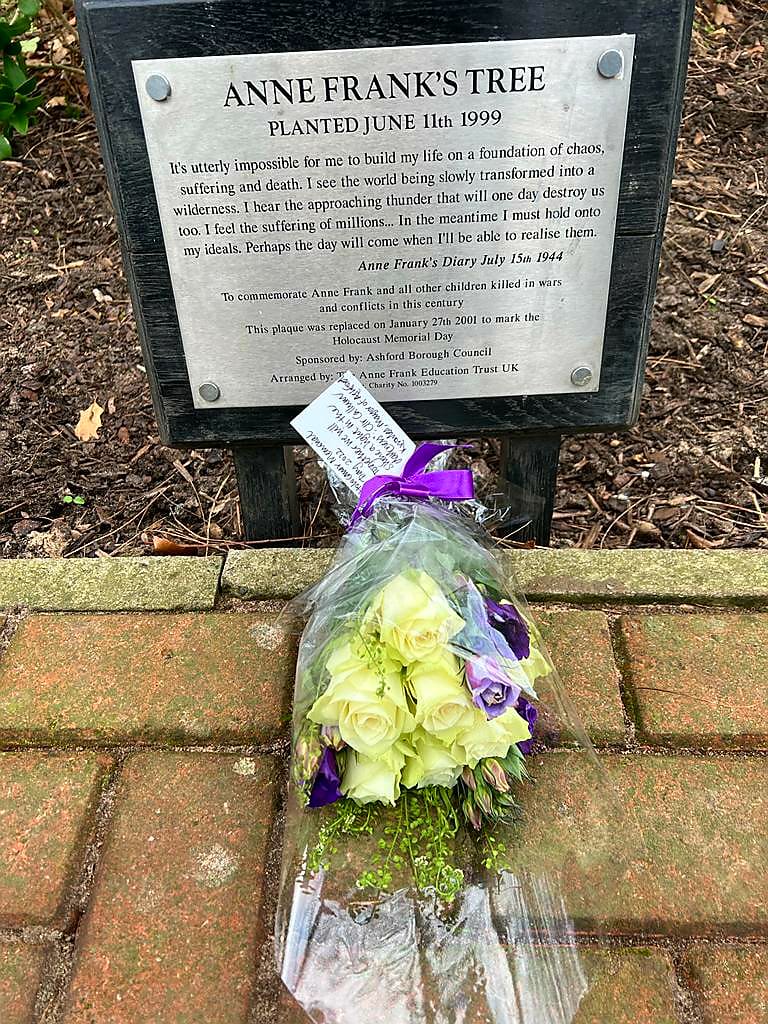 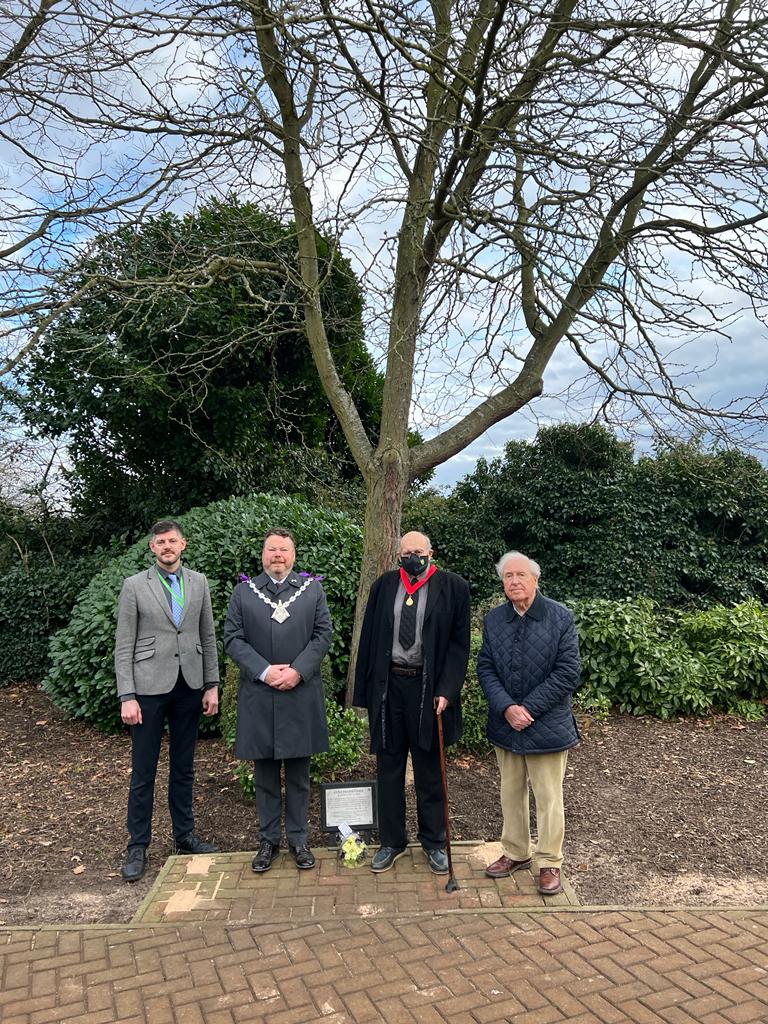 Pictured above, (left) the Mayor of Ashford laying a posie at the Ann Frank Tree in Memorial Gardens, Ashford, (centre) flowers and plaque at the Ann Frank Tree, (right) from left to right, Portfolio Holder for Culture, Tourism and Leisure Cllr Matthew Forest, The Mayor of Ashford Cllr Callum Knowles, together will Cllr David Smith, and Cllr Paul Clokie.

Unfortunately, due to COVID concerns this year’s events were not publicly advertised, however, we welcome the local community to visit the Woodchurch ‘80 Trees for 80 Years’ AJR tree and the Anne Frank Tree in Memorial Gardens, Ashford.

The theme for HMD 2021 is ‘Be the Light in the Darkness’.  It encourages everyone to reflect on the depths humanity can sink to, but also the ways individuals and communities resisted that darkness to ‘be the light’ before, during and after genocide.

Below you can view the virtual exhibition exploring the theme of ‘Be the Light in the Darkness’.

The pre-recorded ceremony was filmed in separate locations including The Parish Church of St Michael & All Angels in Tenterden, Ashford’s WWI Tank and Registered War Memorial, and Civic Park. 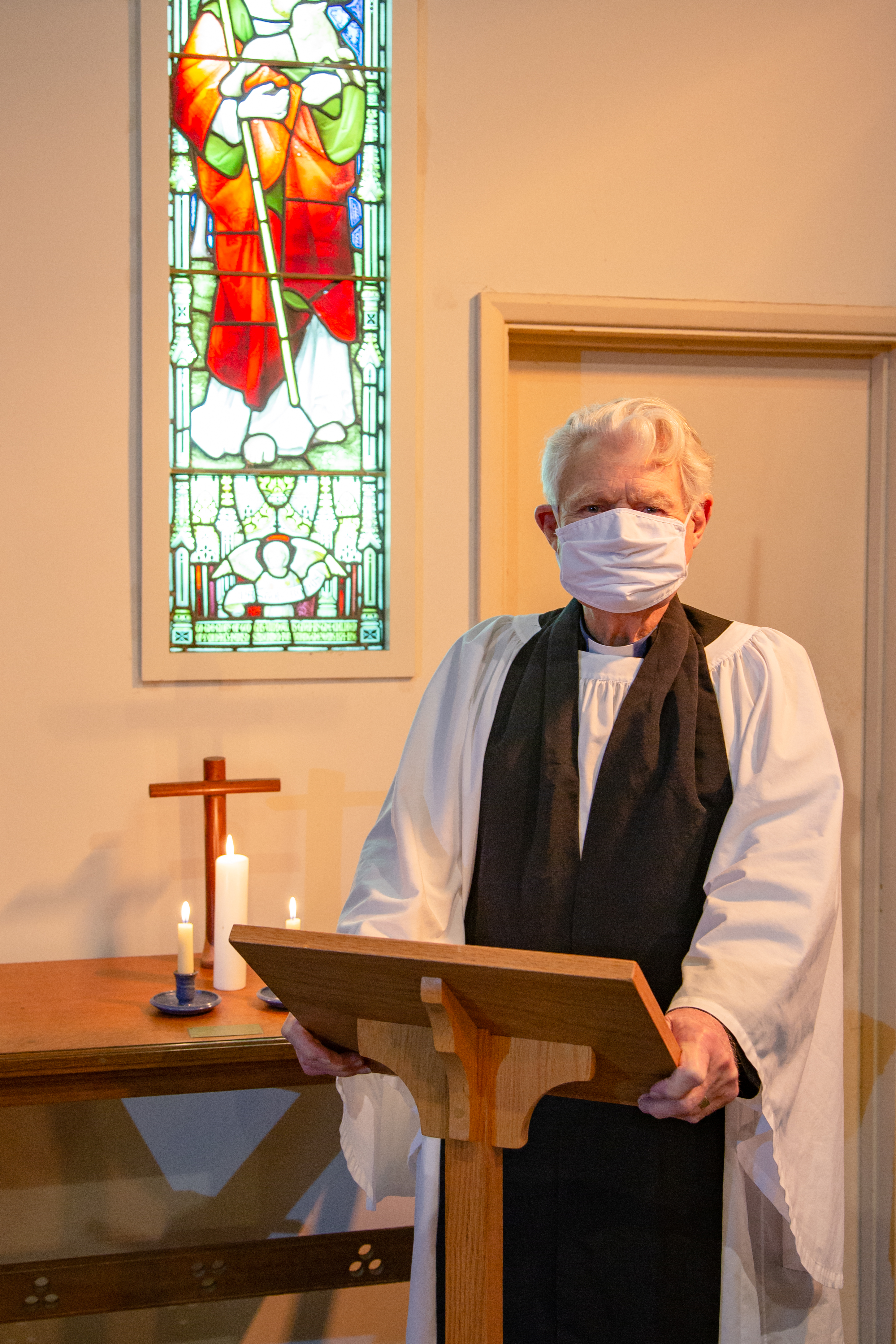 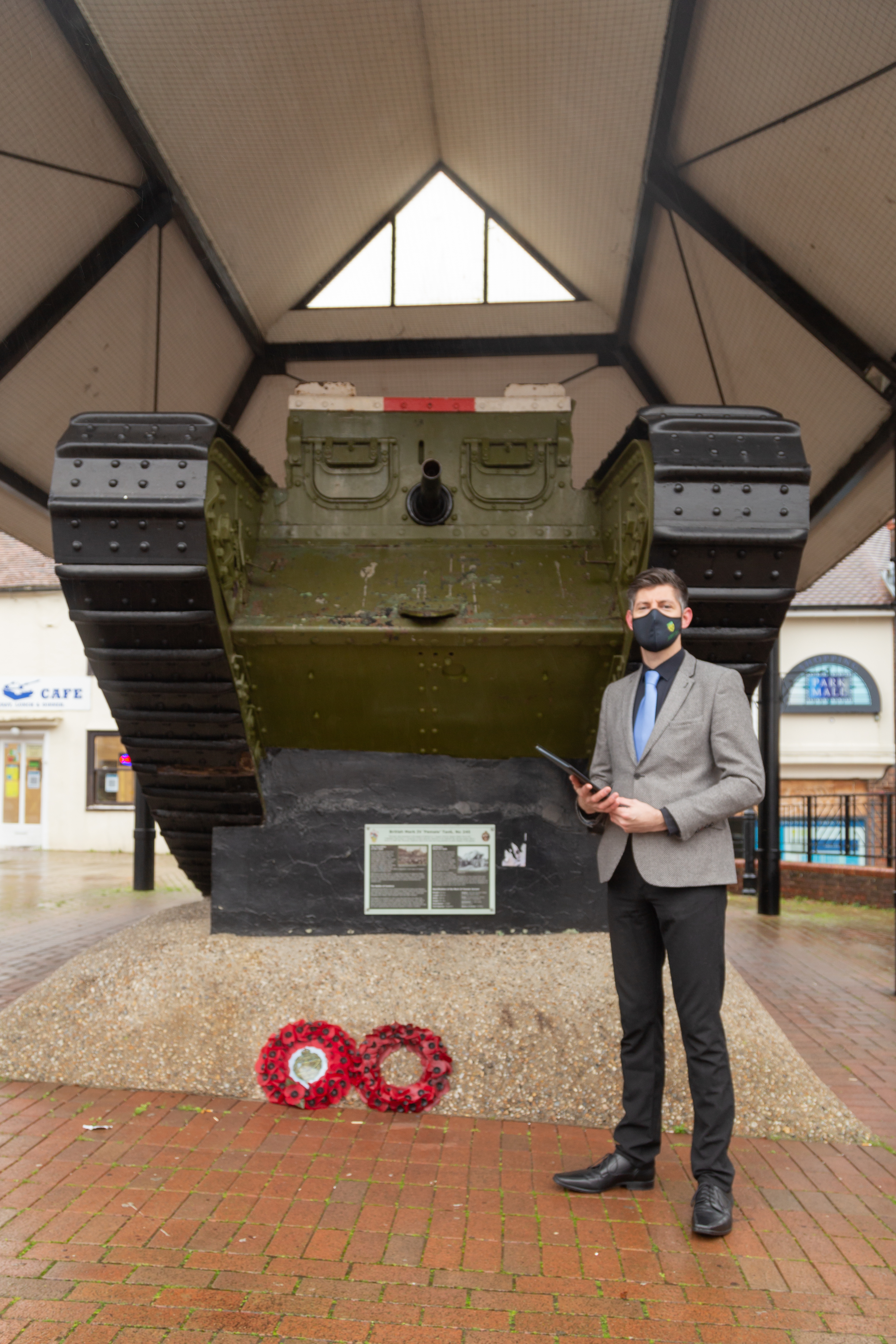 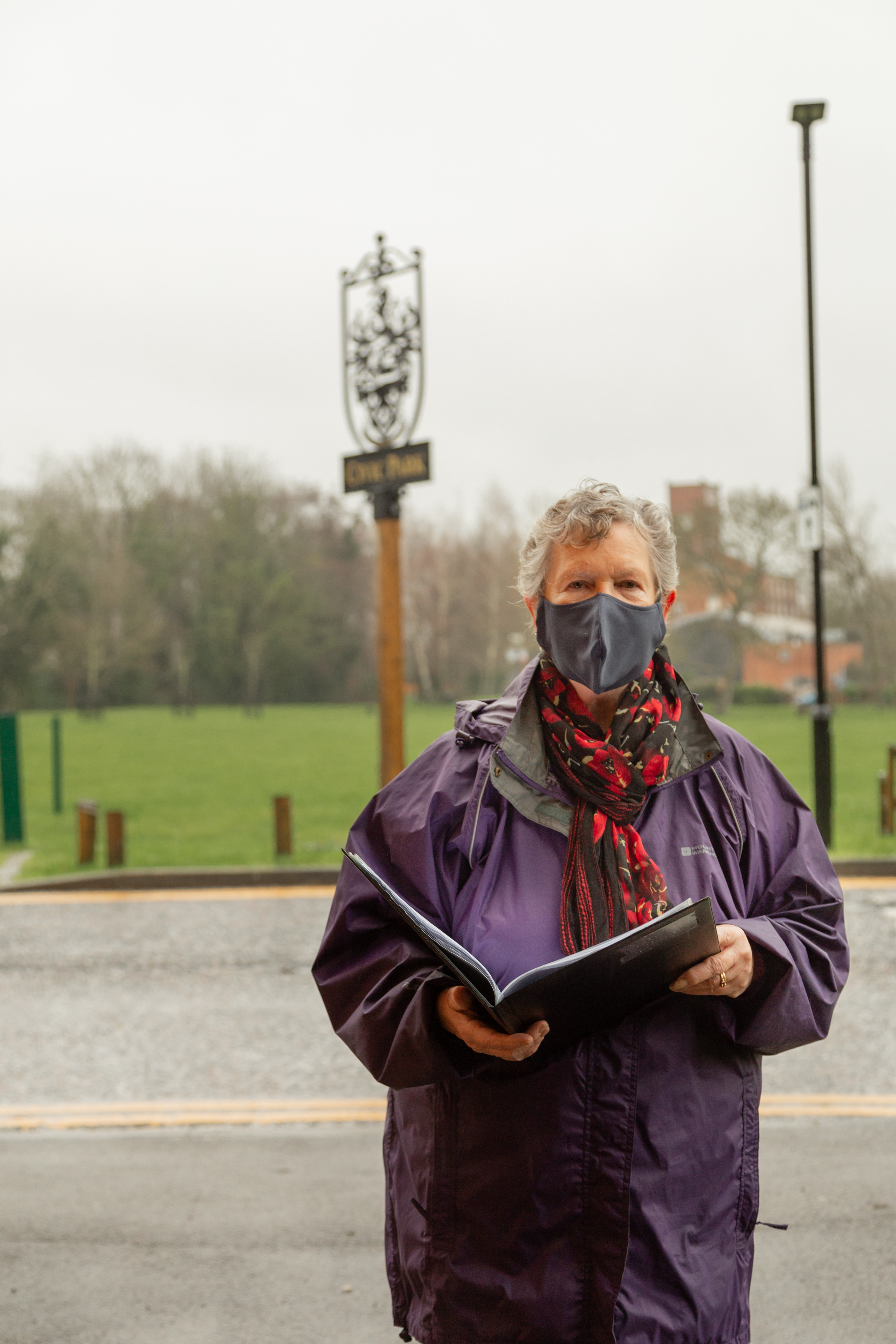 To mark Holocaust Memorial Day 2020 the former Mayor of Ashford, Cllr Jenny Webb visited a small exhibition in the Ashford Gateway building and laid a posy at the Anne Frank Memorial Tree (the images below were taken before the Coronavirus pandemic). 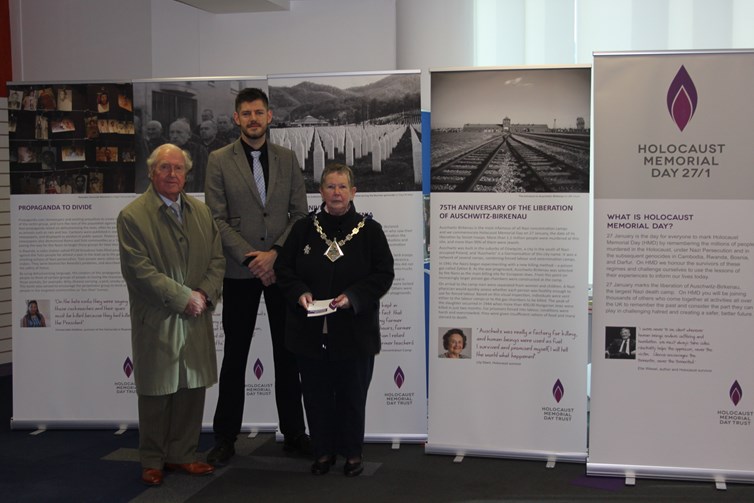 Join Nicola and make your very own HMD lantern from a milk carton.  Don't forget to share the pictures of your finished lantern on social media using the hashtags #HolocaustMemorialDay #LightTheDarkness #HMDAshford

You can mark Holocaust Memorial Day by choosing to read and discuss a book about the Holocaust or more recent genocides.  This activity is perfect for schools, colleges, universities, youth groups and workplaces.  Alternatively, friends, neighbours, colleagues or interested members of your community can get involved too.

This resource includes a number of fiction and non-fiction options for exploring the Holocaust, Nazi Persecution and the genocides that followed in Cambodia, Rwanda, Bosnia and Darfur. You could combine your book discussion with a minute of silence or a candle lighting as an act of remembrance.  For suggested books and discussion questions go to the Holocaust Memorial Day website.