This year, Armed Forces Day was on 25 June and to launch Armed Forces Week starting from Monday 20 June, a Raising of the Flag ceremony took place outside the Civic Centre at 11am. 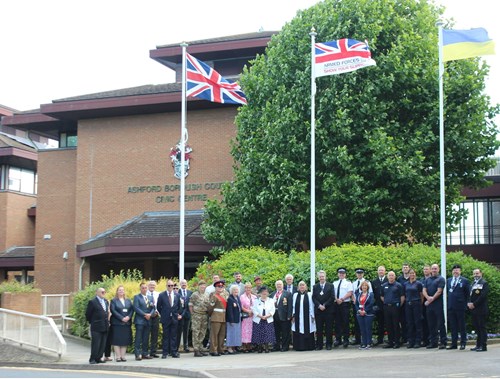 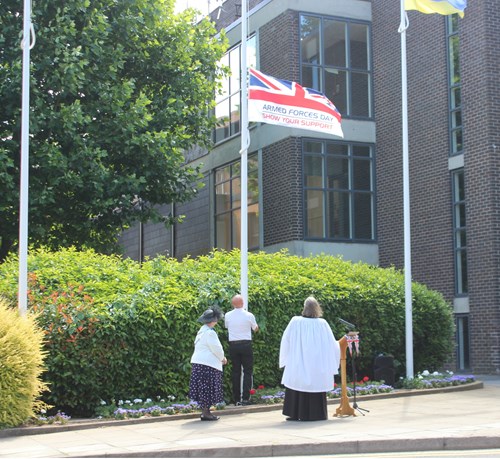 On 26 June, an Armed Forces Day celebration took place at Civic Park between 10am to 5pm, organised by the Ashford Poppy Appeal team and supported by Ashford Borough Council. More information on this event is available on Facebook.

The annual Armed Forces Day ‘Raising of the Flag’ Ceremony took place on Monday 21 June 2021 at the Civic Centre.

The Mayor of Ashford, Cllr Callum Knowles was joined by the Mayor of Tenterden, Cllr Dr Lisa Lovelidge, the Leader of Ashford Borough Council and the Chief Executive. 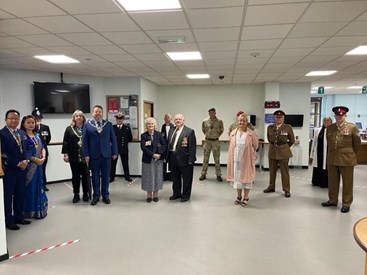 Also in attendance were representatives from the Royal Navy, the British Army, the reservists, veterans, councillors and the Royal British Legion.

Across the nation, on the last Monday in June each year a special flag is raised and flown in recognition of Armed Forces Week.

On Monday 22 June 2020 outside Ashford Borough Council’s civic centre, six representatives of the council and Royal British Legion paid their respects taking into consideration the current Covid-19 pandemic and the requirement for social distancing.

In her opening speech Councillor Jenny Webb, the Mayor of Ashford between May 2019-July 2020 said:

“The ceremony of ‘Raising the Flag’ signifies the great respect and appreciation for our Armed Forces not only of today but every day. This year especially it is a poignant opportunity to celebrate Armed Forces Day as it enables us to thank all of our Service Men and Women for the manner in which they rise to each challenge and support the Nation - no matter what or who the foe. And to offer our consolidated support for the men and women who make up the Armed Forces community: from currently serving troops, service families, veterans, reservists and the cadet force.  We also acknowledge the exceptional work carried out by the Royal British Legion.”

The Mayor was joined by the Leader of the Council, Councillor Gerry Clarkson and the President of the Ashford Branch of the Royal British Legion, Mr Dhan Limbu, along with the Mayor’s Chaplain, Reverend Dr Sue Starkings - who led the service.

A one minute silence was observed as the Armed Forces Day flag was raised and the Mayor read a poem of reflection.