Advice and Support For the Armed Forces Community

Show Your Support for the Armed Forces Community

What is the Armed Forces Covenant?

The Armed Forces Covenant is a promise from the nation to those who serve. It says we will do all we can to ensure that they are treated fairly and not disadvantaged in their day-to-day lives. This includes offering injured servicemen and women and bereaved families extra support where appropriate.

The borough of Ashford marked its commitment to supporting servicemen and women, their families, reservists and veterans with a special signing of the Armed Forces Community Covenant on Saturday 10 May 2014. We are encouraging Ashford businesses, community groups and individuals to sign up to the Covenant and pledge their support to the Armed Forces community.

In February 2020 ABC received the bronze award from the Defence Employer Recognition Scheme (ERS). The ERS recognises commitment and support from UK employers for defence personnel. The scheme comprises bronze, silver and gold awards for employers who support those who serve or have served in the Armed Forces, and their families.

Key principles of the Covenant

The key principles of the Covenant are that:

the  same. The scheme encompasses bronze, silver and gold awards for employer organisations that pledge, demonstrate or advocate support to defence and the armed forces community, and align their values with the Armed Forces Covenant.

Ashford Borough Council is committed to this scheme and currently holds the Bronze award.

As well as signing the Armed Forces Covenant this means that we have pledged to support the armed forces, including existing or prospective employees who are members of the community. We also promote being armed forces-friendly and are open to employing reservists, armed forces veterans (including the wounded, injured and sick), cadet instructors and military spouses/partners. 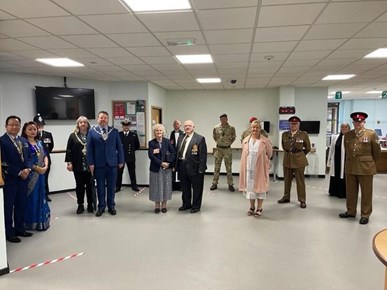 The annual Armed Forces Day ‘Raising of the Flag’ Ceremony took place on Monday 21 June 2021 at the Civic Centre.

The Mayor of Ashford, Cllr Callum Knowles was joined by the Mayor of Tenterden, Cllr Dr Lisa Lovelidge, the Leader of Ashford Borough Council and the Chief Executive.

Also in attendance were representatives from the Royal Navy, the British Army, the reservists, veterans, councillors and the Royal British Legion.