Between 2014-2018, Ashford Borough Council hosted many commemorative events to mark the 100th anniversary of the First World War (WW1). The events remembered the bravery of those who fought, lived and died during the conflict.

Thursday 1 August 2019 was the 100th anniversary of the arrival of the Mark IV Tank in Ashford.

Ashford was among 265 UK towns to be awarded a tank after WWI. This was due to the amount of war bonds that had been purchased. 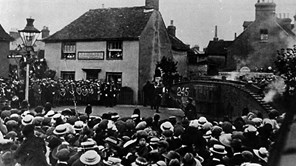 Today, it is one of seven that remain in the world and the only one still on public display. It is also Grade II listed and a registered war memorial.

The 100th anniversary was celebrated with an event in Ashford town centre on 3 August 2019. The photo below shows The Worshipful the Mayor of Ashford Cllr Jenny Webb with members of the Medway branch of the Royal Tank Association. 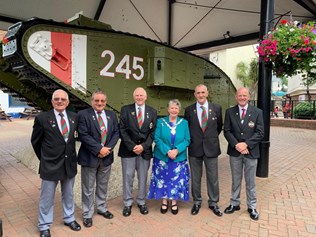 The 100th Anniversary of the Armistice

The 100th anniversary of the signing of the Armistice – which ended WWI – occurred on 11 November 2018. There were a lot of events held in this final year of WWI commemorations.

The events were focused around the themes of peace and reconciliation. They were used to remember the sacrifice made by those both at home and overseas.

Ashford Memorial Gardens hosted the Fields of Battle, Lands of Peace 14-18 in June 2018. This photographic exhibition was put together by photographer Michael St Maur Sheil and the event received praise from around the world.

The open-air exhibition told the story of WWI through the only remaining witnesses – the fields of battle. For more information about the exhibition, please visit the Fields of Battle, Lands of Peace 14-18 website. 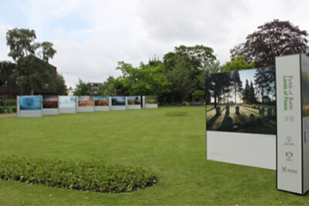 The exhibition also included stories and photographers of Ashford in the war. This focused on industrialisation, the role of women and of our rural communities. It provided an insight into the sacrifices made by residents of the borough.

View a video of the exhibition in Ashford.

Thursday 9 August 2018 was the 100th anniversary of Corporal Frederick George Coppins receiving his Victoria Cross award. The date was marked with the unveiling of a commemorative paving stone in the village of Charing.

Frederick served in WWI with the 8th Canadian Battalion, 90th Winnipeg Rifles. He was given the award for his actions in Amiens, France on 9 August 1918. He single-handedly took out a machine gun position that was targeting his platoon. He saved the lives of many men in the process.

The paving stone was unveiled by Brigadier-General Lowell Thomas OMM CD, Defence Advisor at the High Commission of Canada. He was accompanied by Her Majesty's Vice Lord Lieutenant of Kent and Mr Arthur Coppins, Corporal Coppins' nephew. 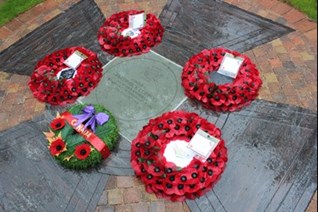 Battles Over: A Nation's Tribute

Ashford took part in a national event on Sunday 11 November. Battle's Over: A Nation's Tribute was marked with beacons being lit and church bells being rung to signify peace. This was to pay tribute to the millions of people who gave their lives, or who returned home wounded during WWI.

A drum head service and music was performed by The Band of the Princess of Wales' Royal Regiment. The event ended with the first lighting of the new Ashford Civic Beacon.

A remembrance service was held in the Memorial Gardens at 11am and the lighting of the Civic Beacon was at 7pm. In addition, a beautiful poppy tribute was unveiled in Civic Park (previously known as North Park).

3,000 sculptured metal poppies were planted in Civic Park (previously known as North Park) to create a stunning visual display. The display took inspiration from the popular 'Blood Swept Lands and Seas of Red' exhibition at the Tower of London in 2014. 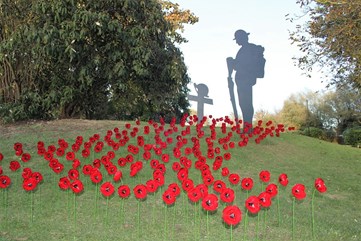 The exhibition marked the 100th anniversary of the signing of the Armistice. The poppies were then bought by Ashford residents. A percentage of these sales were donated to the military charity, SSAFA (Soldiers, Sailors, Airmen and Families Association). A total of £5,000 was raised. 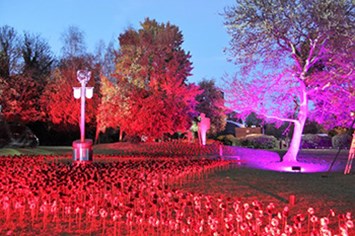