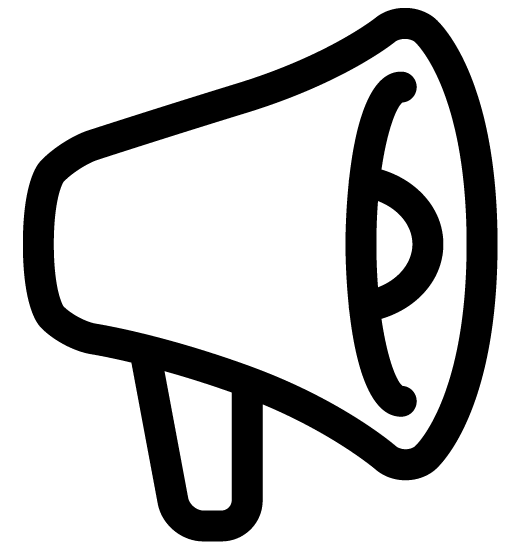 A Cleaner Ashford Starts With You 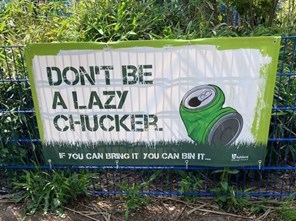 We love Ashford, but we hate litter. We are on a mission to stop people being lazy chuckers. However, we can’t do this alone, we need help from the residents of Ashford.

It’s a fact that tidy streets and parks have a positive impact on people’s well-being and messy streets attract even more mess and negative feelings.

‘Don’t be a Lazy Chucker’ is our brand new litter campaign aimed at those inconsiderate people who bring it but don’t bin it. The campaign will focus on four major ‘hotspot’ litter locations and later expand to cover further areas in the borough.

Litter is Harmful to Wildlife 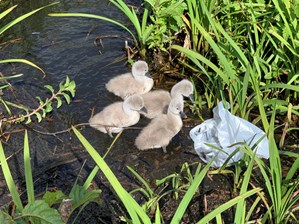 When litter is dropped on the streets or in our green spaces, it not only looks unsightly but it also creates a hazard for wildlife.

The RSPCA receive on average 14 calls a day across the UK about animals affected by litter and these calls spike in the summer months. However, this could be higher as many wild animals are never found.

How can litter be dangerous to animals?

Everyday objects that seem perfectly safe, can sadly become hazardous when found accidentally by animals. By disposing of our rubbish safely instead of littering we are making choices that could save many lives.

Protecting animals from harmful rubbish is easy. Dispose of your rubbish responsibly by recycling, reusing or simply putting it in the bin!

With such a harmful effect, what can we do to protect their home and stop people dropping litter.

Could you become one of Ashford’s #litterheroes?

#Litterheroes that took part in training with us and Keep Britain tidy will now be able to conduct safe and accountable litter picks in line with the guidance set out on our website. Each group will be given a set of litter pickers to use and loan out to local parishioners and will support the delivery of the ‘Lazy Chucker’ campaign in their area.

Get guidance on how to run a litter pick.

The Great British Spring Clean takes place in March each year. Once we have the dates of the next Spring Clean we shall publish these 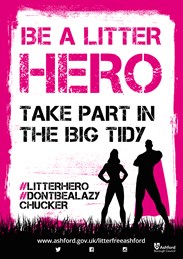 ‘Big Tidy’ events are all about empowering communities to take pride in their area and come together to clean it up. From litter picking to cutting bushes, washing bins and signs, to cleaning off graffiti, all tasks are guided by a member of the environment team or one of our contractors.

All residents have to do is turn up on the day, choose what they wish to do and tidy up and notice the difference.

Keep an eye out on our social media channels for the next 'Big Tidy' in your area.

+ Can I loan equipment from the council?

Yes, you can loan equipment off the council such as litterpickers and Hi-vis vests but stock is limited. If you wish to loan out equipment or register a litter pick please complete the community litter pick form on our webpage.

+ How do I dispose of collected litter?

Volunteers are asked to re-use supermarket carrier bags, or similar, to collect litter as it is environmentally friendly to re-use these bags and ensures that the volumes of litter collected are manageable to handle.

Page 3 of 4
Next Page > < Previous Page
Also in this section
Parks And Play Areas
Cemeteries, Burials And Memorials
Allotments
Trees
Grounds Maintenance (Aspire)
Memorial Benches
Community Gardens
Your Council
Transparency
Contact Us
Working for Us
Consultations
Conditions of Use