The Asian hornet is not yet established in the UK, but there have been increased sightings in recent years.

As a non-native invasive species, their diet consists of important insects and pollinators. They are also known to be particularly threatening to our native European honeybees who are unable to defend themselves against these hornets. In a rural environment over a third of the Asian hornet's diet can consist of honeybees, and in urban areas this can increase to two thirds – with a colony of Asian hornets able to predate on up to 40% of a single honeybee hive.

If Asian hornets go on to become fully established in the UK, then it is estimated the cost of control could be £7 million annually. However the economic cost of damage associate is estimated to be much higher.

By reporting sightings of these species as quickly as possible you could be helping to prevent the establishment of this new invasive non-native species.

As we approach spring (march onwards) it is important to start looking out for early signs of Asian hornet activity.

Evidence suggests that Asian hornet will start to emerge from hibernation as soon as we start having temperatures consistently above 13°C (55°F) for four or more days.

Once queens have emerged, they will begin gathering wood and plant material which they mix with saliva and water.  This creates a paper-like material for nest building.  These nests are likely to start off as ‘golf ball sized’ and expand to the size of a ‘small orange’ (approximately 60 mm, or 2½ inches, in size).

As the queen builds this nest, she will continue to lay eggs until she has raised a brood of worker hornets.  If left undetected, a nest can produce its first brood of workers between May and June. 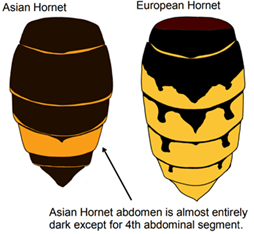 Asian hornets also have yellow tipped legs and are often slightly smaller than our native European hornets.  An Asian hornet is often 25 mm to 30 mm in length (approximately 1 inch), compared to our native hornet that is 30 mm to 35 mm in length. If you would like an easy visualisation of this size, a 2p coin is 26 mm in diameter.

If you do not have access to this app, you can also submit a report online or email: alertnonnative@ceh.ac.uk