Armistice Day or Remembrance Day: What is it and why is it important?

Armistice Day, often referred to as Remembrance Day, is on 11 November.  The Armistice was an agreement to end the fighting of the First World War at 11am on 11 November 1918.  It put an end to four years of conflict that resulted in the death of more than 16 million people – soldiers and civilians alike.

Remembrance Day was first observed in 1919 throughout the British Commonwealth. To this day, we mark Remembrance Day around the United Kingdom with a Two-Minute Silence at 11am on the 11 November.

Why do we hold a Two-Minute Silence?

The first Two-Minute Silence in Britain was held on 11 November 1919, when King George V asked the public to observe a silence at 11am.  He made the request so "the thoughts of everyone may be concentrated on reverent remembrance of the glorious dead".

There is also Remembrance Sunday every year, which falls on the second Sunday in November – this year it is on 13 November. Remembrance Sunday is a day to commemorate the contribution of British and Commonwealth military and civilian servicemen and women in the two World Wars and later conflicts.

The National Service of Remembrance at the Cenotaph in London is held on Remembrance Sunday. The service is attended by senior members of the Royal Family, including His Majesty The King, HM Government and features a March Past involving 10,000 veterans.

Dedication of Garden of Remembrance and Armistice Day

The Community, military and veteran representatives are invited to join the Mayor of Ashford for the Dedication of the Garden of Remembrance on Monday 7 November at 11am and for Armistice Day on Friday 11 November at 10.50am.

Ashford Borough Council held its annual Remembrance Sunday Commemoration Service in the Memorial Gardens on Sunday 13 November 2022. Dignitaries, invited representatives and veterans were invited into the Garden of Remembrance where the Mayor of Ashford and other distinguished guests to lay the wreaths. A selection of photos are available to view in the image gallery below, click the arrows to scroll left and right. 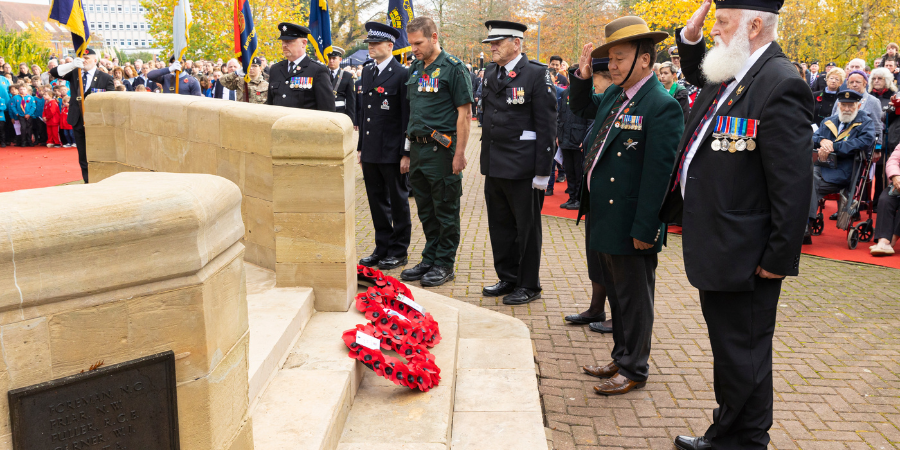 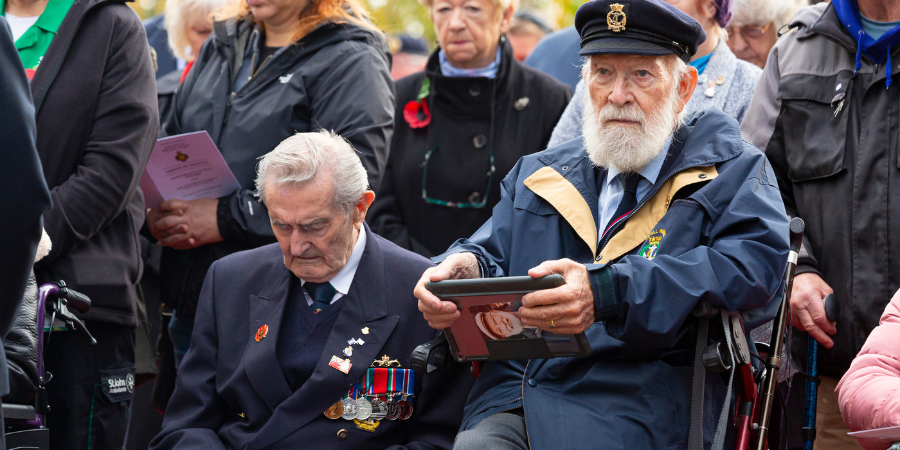 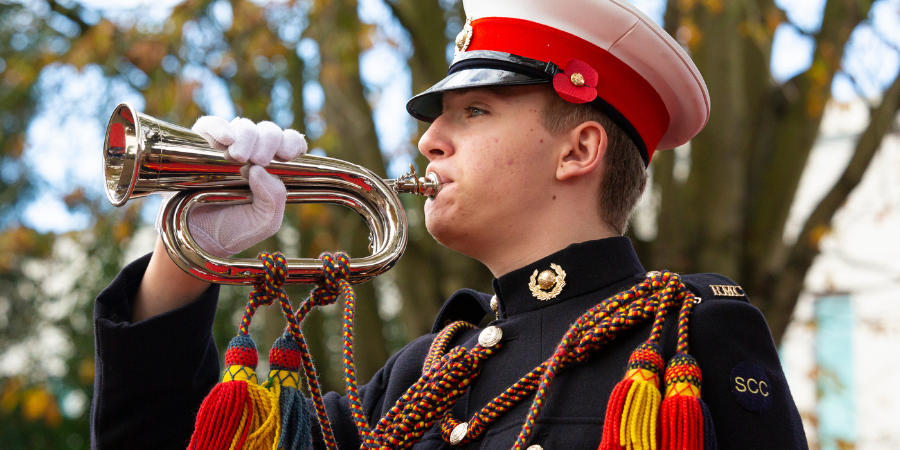 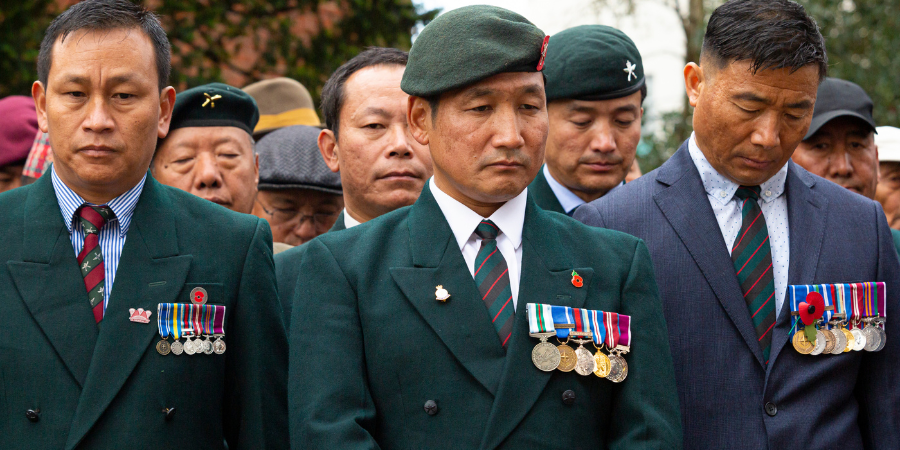 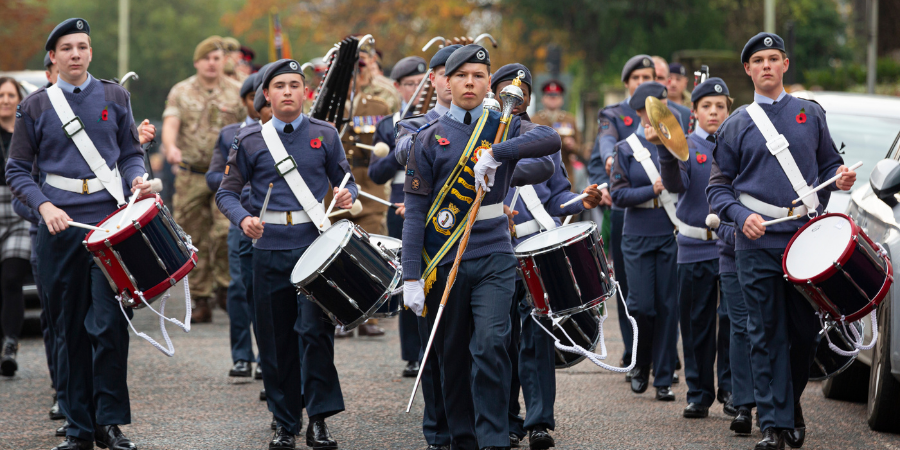 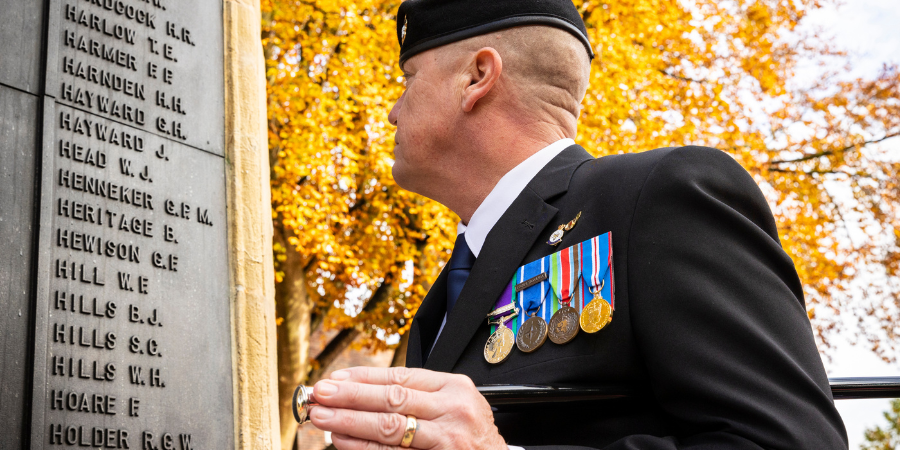 At 9.30 a.m. on 13 November, there was a special Remembrance Sunday service at St Mary the Virgin church in the centre of Ashford, attended by the Mayor and Armed Forces representatives. The service included hymns, prayers, and music with organ and choir.

A parade took place from Recreation Ground Road at 10.30 am, which proceeded towards the Tenterden War Memorial. The service included the reading of the names on the War Memorial as well as the laying of wreaths.

A History of Remembrance in Ashford

In 2021 Ashford held a service for invited guests in the Memorial Gardens to mark Remembrance Sunday. This was a short service that included the laying of wreaths and two minutes of silence at 11 a.m. 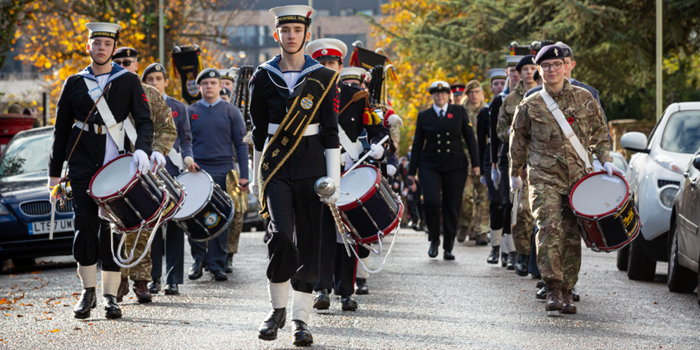 (Above) The Band of the Ashford Sea Cadets Parading to the Memorial Gardens. 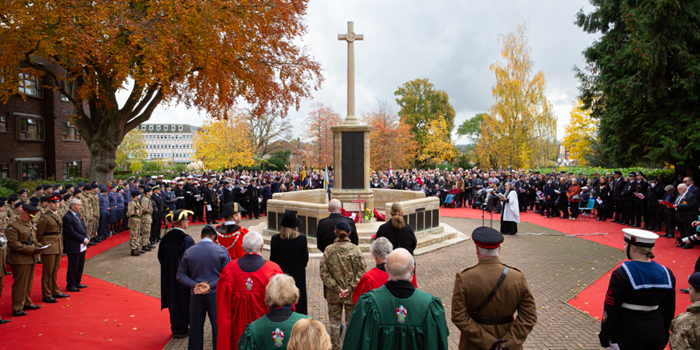 (Above) Remembrance Service 2021 at the Memorial Gardens, Ashford. 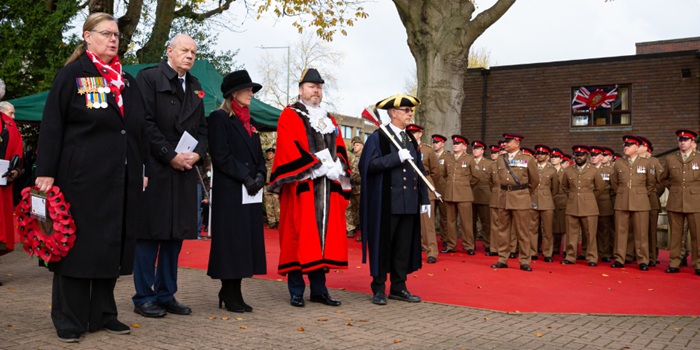 (Above) The Mayor of Ashford 2021-22 joined by local dignitaries for the Remembrance Sunday Service 2021.

In 2020 Ashford Borough Council filmed the event and provided a live stream to enable the public to follow proceedings at home. The live stream was hosted on the council’s Facebook page, allowing residents to tune in via their computers or on a mobile device. This was the first time in history that the National Service of Remembrance events was closed to members of the public, in line with the Government’s scientific and medical advice. The Mayor of Ashford, along with distinguished guests and invited representatives were in attendance to lay the wreaths. There was no procession and wreath layers were asked to report direct to the Memorial Gardens.

For those who were unable to watch the live stream, an edited version of Ashford's 2020 Remembrance Sunday service is available to watch below: 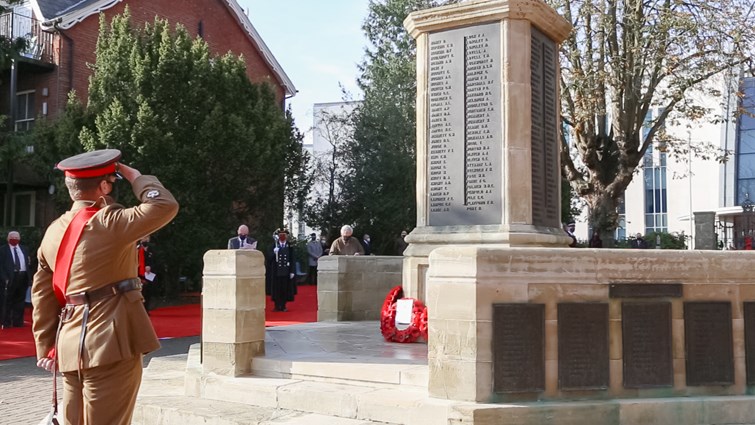 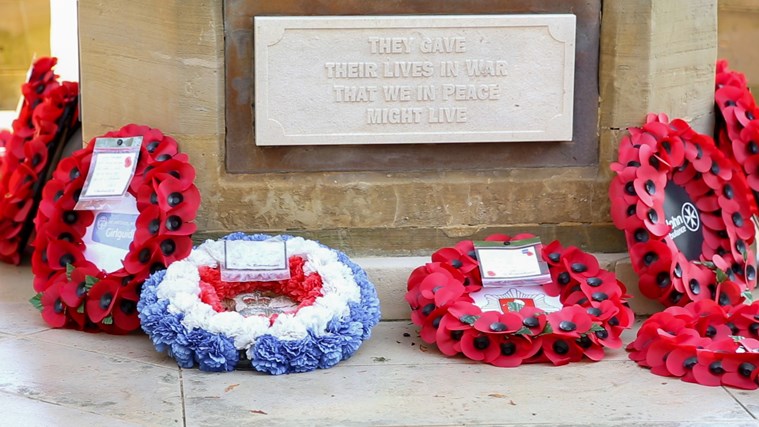 (Above) Wreaths laid as part of the Remembrance Service, Memorial Gardens, Ashford 2020. 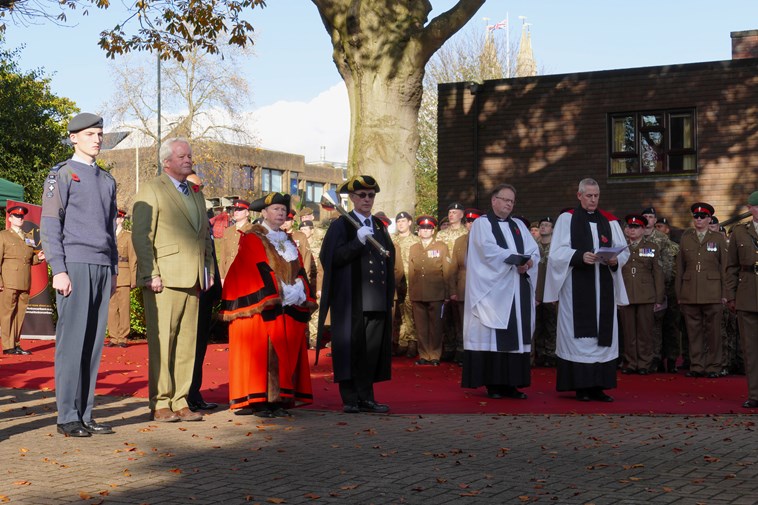 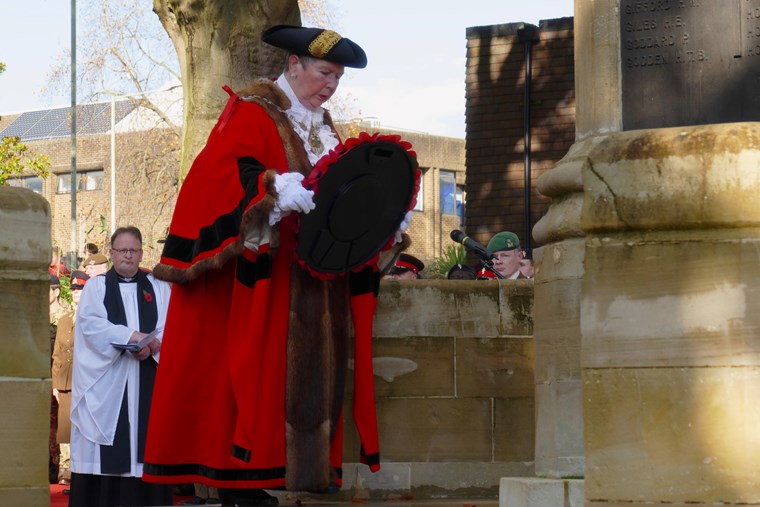 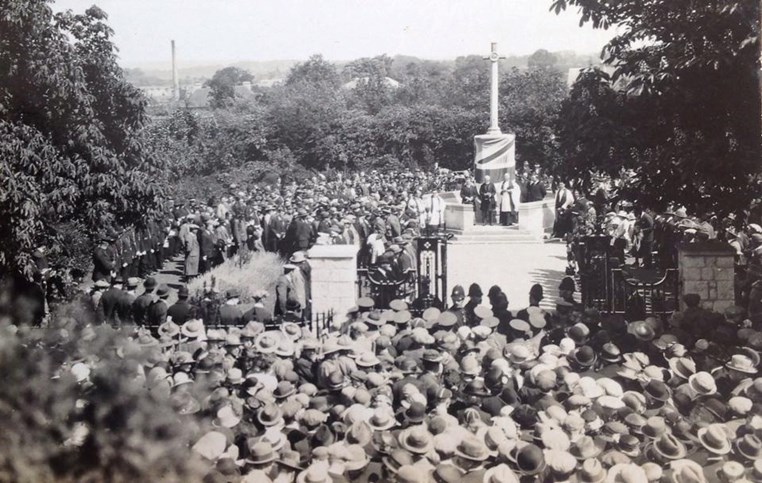 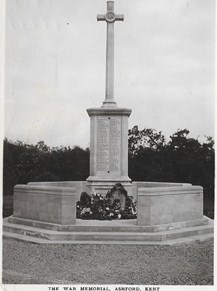 The Ashford War Memorial was designed by local architect Edwin A Jackson and unveiled on 1 June 1924 by General Sir Ian Hamilton GCB GCMG DSO, Commander of the British Mediterranean Expeditionary Force at Gallipoli. The land, memorial and ornate wrought iron gates of remembrance were funded by public subscription which by 1924 had raised more than £10,000.

The names of 250 of the fallen of the First World War were inscribed on the memorial and among those named is Sergeant Harry Wells, 2nd Battalion, Royal Sussex Regiment, who was awarded a posthumous Victoria Cross at the Battle of Loos in 1915. Following the Second World War, further names, including civilians, were added on plaques affixed to the low walls surrounding the memorial.

Today this elegant memorial and its elaborate memorial gates stand testament to the sacrifice and memory of those who gave their lives in subsequent conflicts throughout the world.

The Unknown Warrior is a British First World War soldier unknown by name or rank, brought from France to Westminster Abbey to be buried on 11 November 1920. The body of the Unknown Warrior was taken by train from Dover to London and the railway carriage in which it was carried is now in the care of the Kent & East Sussex Railway.

The Cavell Van is cherished by the Tenterden-based railway, where it is a popular attraction. It has been lovingly restored and contains a replica of the Unknown Warrior’s beautiful coffin, as well as stories of the heroes it carried. 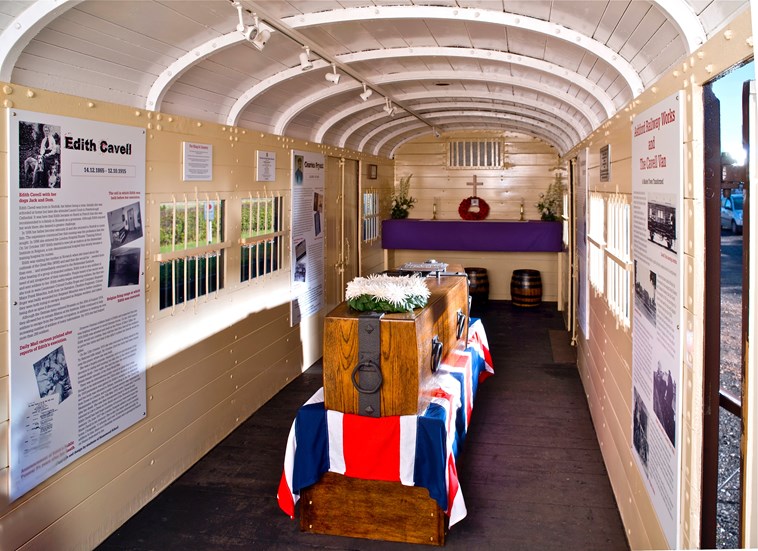 Pictured above: The Cavell Van on display at the Kent & East Sussex Railway. Image courtesy of Robin Dyce.

Remembrance Day: Why wear a poppy?

Find out more about why we wear poppies and where you can buy them from.