An appeal has been launched to help fund the funeral of a former rough sleeper from Ashford who was providing inspiration for others by successfully completing a life and work skills programme before his tragic death.

Jason Curtis died after an accident in the River Medway in Maidstone in July. Now his family has set up a GoFundMe page in the hope of raising enough money to cover his funeral costs.

Here tributes are paid to a man who was turning his life around after overcoming huge personal difficulties, setting an example to others in his situation.

“Jason approached Ashford Borough Council as homeless on several occasions following a lot of chaos in his life, including a prison sentence and regular rough sleeping.

“In February 2020 he again approached us and, with the ‘Everybody In’ Government directive prompted by the COVID-19 pandemic designed to provide accommodation to every rough sleeper, we were able to offer Jason temporary accommodation.

“From this time and working closely with Jason, it was clear that he needed ongoing and regular support, to help him overcome his past personal issues and get him on track to doing the things he told us he wanted to do. After several failed attempts, Jason began to feel more motivated and look at making positive changes in his life.

“He agreed to attend his first appointment at the local substance misuse clinic and attend a GP appointment made for him to address his ill health and poor wellbeing.  These were two major steps for Jason that showed a big impact on his outlook, so much so, he decided he was ready to begin a Maker Life ‘Life and Work Skills Programme’ in February 2021, where he made friends, got involved in the training courses and begin to feel he was moving things on in his life.

“Jason continued to attend his appointments at the clinic and stayed the whole Maker Life course, obtaining a certificate and praise for his endurance and completion, given the many struggles he had begun to overcome during this time. We will all miss our friend Jason but feel happy in the knowledge that, despite his sad and untimely death, he had achieved successes that he told us just before his passing, he never believed he could achieve.” 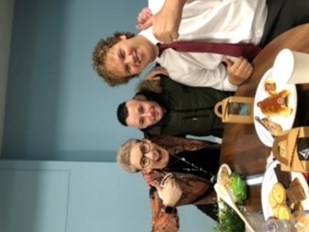 “We are devastated to have heard the news about the passing of Jason Curtis and would like to express our deepest condolences to his family and loved ones. Jason joined our course at the beginning of May and graduated with us at the end of June. He was truly a remarkable man who positively impacted the lives of the project staff and participants. We are grateful to have met Jason, he will truly be missed by all of us.”

Justin Burden said: “I was devastated at the news of the passing of Jason and would like to pass on my condolences to his friends, family and those that he came into contact with.

“I have known Jason since December 2019 when he was a guest in the Ashford winter night shelter. Since then I’ve worked with Jason in a number of capacities including as his mentor for the last year. It was such an encouragement to see the progress that he was making especially with the Maker Life project that he completed recently.

“He improved the life of many that he came in contact with and will be sorely missed by many people especially myself.”

Other News you may be interested in
A Sporting Chance launches in the Ashford borough
£175,000 boost to help tackle homelessness in Ashford linked specifically to COVID-19
Localise, the new ‘High street in your hands’ app
Got a story to share?