The Government has confirmed that we have returned to a national lockdown and everyone must Stay at Home. Visit our Coronavirus pages for more information on the support and advice available.

Book a Coronavirus test online if you don't have any symptoms.

Book a Coronavirus test online if you have symptoms.

Vision set out for the South of Ashford Garden Community

A Five Year Vision & Strategy setting out how three major combined developments in the south of Ashford will come together, has been adopted by Ashford Borough Council. The Strategy received major endorsements by partners including private developers and the Chilmington Management Organisation, ensuring a commitment to achieving the Vision for the South of Ashford Garden Community (SAGC).

This strategy represents the aspirations of local residents, local organisations and key partners who are looking to ensure that these developments come forward with quality in mind, where infrastructure is planned and delivered in tandem with new homes, as the community grows.

The importance of high quality design and placemaking, guided by Garden City principles but shaped to reflect 21st century living, is a key theme running through the strategy. Most importantly, it offers a vision of living and working in the wake of Covid-19 as we all seek to recover from the impact of the pandemic and come back stronger as a community.

While this vision may not provide all the answers, it sets out actions which are achievable when we all come together, combine resources and work towards a shared goal. New communities like this will be more resilient to climate change and economic uncertainty.

By setting out our ambitions within this document we will work with developers and partners to meet our objectives and seek out opportunities to bring greater investment and create housing that is genuinely affordable.

Cllr Neil Shorter, portfolio holder for planning, said: “Building communities in the style of historic villages that have evolved over hundreds if not thousands of years as places that people “own” and are fundamentally part of rather than simply dormitory estates that people live in and take decades to make “home” is vital - this is at the heart of what the SAGC is endeavouring to achieve.

“Chilmington Green, as a new community, when it was in its early formation had put forward a new stewardship model. This took the form of the Chilmington Management Organisation which is beginning to prove its value. This concept emerged in the early 2000s to the final model agreed at Planning in 2014.”

“The same will be true for the SAGC as it too must be governed in a way which allows for community-led stewardship. This is why the SAGC Vision & Strategy sets out a clear plan which brings further proposed developments on board in a way which will ensure community cohesion and joined-up infrastructures.” 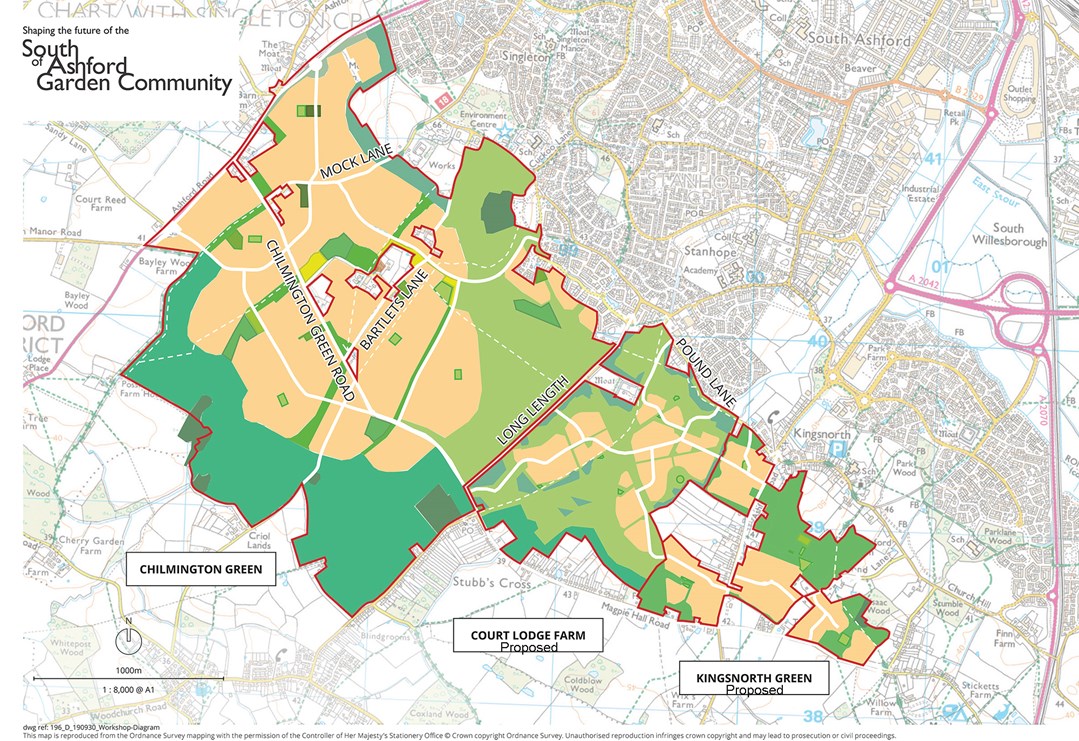 Cllr Jessamy Blanford, ward member for Chilmington, said: “The SAGC gives us the opportunity to knit the new residents and the current residents into playing an important role in developing the area in which they live. As the new dwellings are built and occupied the residents will have the opportunity to promote leisure, sporting, environmental and public art opportunities to make the SAGC a really memorable place to live.”

The vision document follows over 18 month of consultation and work with various stakeholders.

In early 2019 residents of the south of Ashford, along with businesses, voluntary organisations and local government partners, sat down to look at the developments proposed in the area. This was followed by a more in-depth public workshop in the autumn of that year, helping to redress aspects of the masterplan for the area and to produce a series of key themes.

A series of online focus groups, webinars and surveys were then held in September 2020 providing local people with an opportunity to learn more about the SAGC and help shape what these new communities might look like in the future.

For more information about the SAGC visit our website.