Poignant reminders of Ashford’s strong links with World War One will soon greet motorists using one of the busiest access roads to the town.

Work has started on ‘theming’ the large roundabout where Malcolm Sargent Road meets the A2042 / Bad Munstereifel Road and Avenue Jacques Faucheux, close to the Designer Outlet. It has also been renamed Flanders roundabout.

It is part of a wider scheme to improve the safety, appearance and maintenance of the town’s ‘gateway’ roundabouts undertaken by Ashford Borough Council’s Aspire Landscape Management team and Kent County Council’s Highway Services department.

Nine European Quercus trees have recently been planted on Flanders roundabout by Aspire. By July, eight ‘British Tommy’ soldier silhouettes – last seen in the memorial gardens as part of the 2018 Fields of Battle, Lands of Peace commemoration – and also the town’s much-loved floral tank will be installed in the middle of the roundabout, covered in turf and surrounded by a wildflower meadow containing poppies.

The name Flanders is also relevant because the highway layout of the roundabout is based on a Dutch design.

KCC Schemes Project Manager Christopher Koningen said the safety scheme at Flanders roundabout has included some UK-first modifications. This roundabout was found to have a high number of crashes, so the county council tried a new and innovative approach to roundabout design, based on a Dutch idea which provides a flow of traffic, requiring drivers to choose their direction before entering the roundabout.

Christopher said: “The design we based it on incorporates physical kerbs to ensure vehicles remain separated but on such a busy road this was not practical. We decided on a different approach using red surfacing with white hatching to separate lanes to encourage drivers to not cross those areas. It has the added benefit of allowing both lanes on the approach to the roundabout from the A2070 to be used to turn right towards the town centre, increasing capacity. This means the signs look different to anything else you will see in this country.” 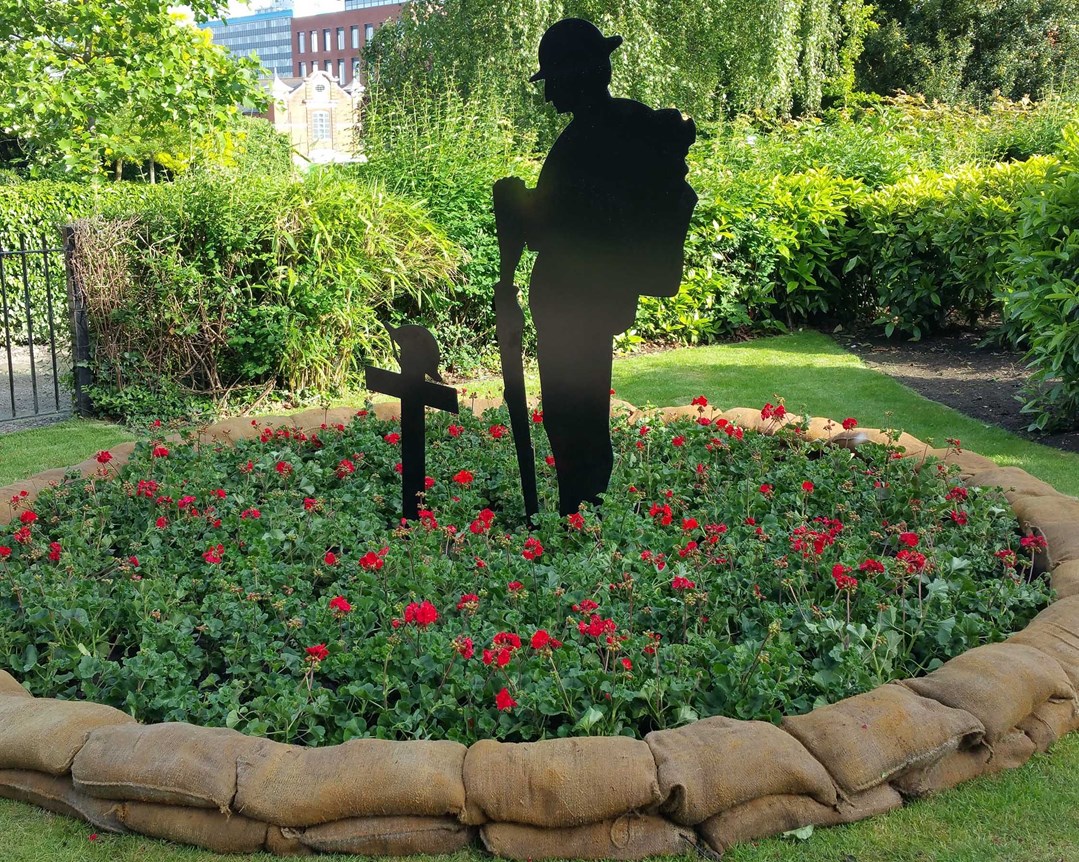 The new design has attracted attention from other highway authorities, as well as currently being considered for adoption into national standards. KCC has plans to roll out the design on other similar junctions.

Cllr Andrew Buchanan, Ashford Borough Council’s portfolio holder for Environment and Land Management, said KCC’s decision to redesign the junction led to discussions on landscaping ideas and it was agreed that it should be a memorial to the fallen of World War One.

“We decided to re-purpose our floral tank which had previously been installed in Vicarage Lane in 2018 to commemorate 100th anniversary since the end of the First World War. It was decided to name the junction Flanders roundabout, both as a reference to the memorial and also as a nod to the low countries of Europe where this roundabout concept originates.”

Cllr Gerry Clarkson, Leader of Ashford Borough Council, has been closely involved in the project and has played a key role in discussing options for the theming and design of the roundabout with Kent County Council. “Not only does this scheme help to make one of Ashford’s key gateway roundabouts a safer place for motorists but it is also enabling us to celebrate our heritage and close links with the Armed Forces,” he said.

At each roundabout there is now ‘pull-on’ vehicle access to ensure the safety of staff carrying out maintenance work while also removing any impact on traffic flow since lane closures and traffic management are no longer required during this maintenance.