Following the death of Her Majesty The Queen, and the wishes of our Patron, His Majesty The King, The Queen’s Green Canopy (QGC) initiative will be extended to the end of March 2023 to give people the opportunity to plant trees in memoriam to honour Her Majesty.

As a nationwide initiative created to mark the Platinum Jubilee, The Queen’s Green Canopy was due to conclude in December - the end of the Jubilee year. However, as the official tree planting season in the United Kingdom is from October to March, the initiative will now be extended to include this full tree planting season, beginning in October 2022 and concluding in March 2023.

The Queen's Green Canopy is proud to be creating a living legacy with over a million trees planted in Her Majesty’s name across the nation during the first planting season, October 2021 to March 2022. The extension of the QGC initiative will build on this legacy and serve as a lasting tribute to Her Majesty’s extraordinary service to her country and her people.

The interactive map created by The Queen’s Green Canopy to showcase the planting projects across the United Kingdom will also continue to the end of March 2023, giving people an opportunity to be part of this special legacy.

Alongside the inspiring floral tributes being left outside Royal Palaces, people can also gift a tree in memoriam in honour of Her Majesty, with trees to be planted in schools and deprived urban areas across the United Kingdom.

For more information on how to get involved please visit The Queen's Green Canopy website.

To gift a tree in honour of Her Majesty please visit the online shop.

Please follow our social media channels with these handles and hashtags:

Further details about tree planting projects in honour of Her Majesty will follow.

The Queen’s Green Canopy (QGC) is a unique tree planting initiative created to mark Her Majesty’s Platinum Jubilee in 2022. All across the UK people were invited to “Plant a tree for the Jubilee” to create a legacy in honour of The Queen’s leadership of the nation, which will benefit future generations. 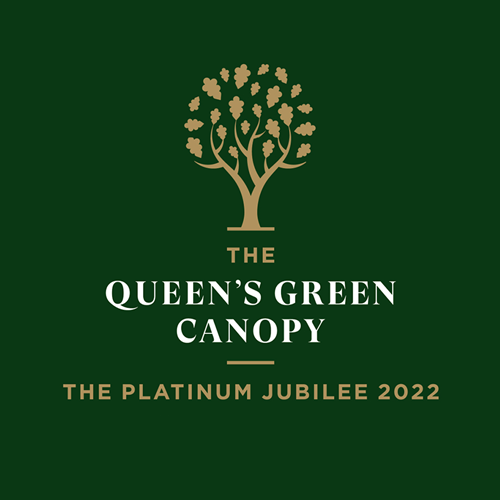 With a focus on planting sustainably, everyone is encouraged to play their part to enhance our environment by planting trees during the official planting season between October to March. Tree planting will commence in October 2022, through to the end of March 2023.

During the first official planting season, from October 2021 to March 2022, the QGC inspired over a million trees to be planted across the United Kingdom. Her Majesty sent a message of thanks for all the trees planted in Her name.

As well as planting new trees, the QGC has dedicated a UK-wide network of 70 Ancient Woodlands and 70 Ancient Trees to celebrate Her Majesty’s 70 years of service.

By inviting everyone to plant considerable numbers of new trees throughout the country, the QGC seeks to highlight the significant value of trees and woodlands as nature’s simple but highly effective way to clean the air we breathe, slow the impact of climate change, create important wildlife habitats and improve our general health and wellbeing.

Further information about the QGC is available online.