Our new Environmental Enforcement Team has gone from strength to strength since they began work in July.

They have been hard at work carrying out investigations into instances of flytipping in the borough and have issued numerous fines to people who were not disposing of their rubbish legally and responsibly.

Notable fines include a Fixed Penalty Notice (FPN) of £400 to the registered keeper of a vehicle that was involved in a fly tipping incident on private land in Kennington. A FPN of £400 was given to a business waste carrier who failed in their responsibilities. They have also issued FPNs to business waste carriers who failed in their duties and were unable to produce Waste Transfer Notices.

Illegal waste carriers will be regularly targeted by our enforcement team alongside officers from Kent Police and the Environment Agency. The collective enforcement team carry out enquiries, arrest people suspected of fly tipping, seize vehicles and collate evidence with a view to prosecuting offenders for waste related crimes. These types of action aim to crackdown on fly tipping.

What can you do to dispose of your waste responsibly? 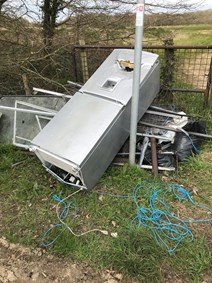 Fly tippers often target households via social media or local advertising, luring customers in with cheap rates to dispose of unwanted furniture, building rubble or garden waste. However, these unlicensed waste carriers often simply dump the waste wherever they can get away with it, including in Kent’s country lanes.

Householders or small businesses found to be using criminals to dispose of their waste can, and are, being prosecuted by local authorities in Kent with FPNs of up to £400 per offence. Failure to pay a FPN may result in court action where fines can be significantly larger.

If using a commercial service, householders should check whether someone is licenced to carry waste by visiting the Environment Agency website. Alternatively, you can call 03708 506506. It also helps if householders receive a written receipt or transfer note, including contact details, description of waste removed and details of where the waste is being taken to.