Debbie Greaves, pictured below on her retirement as Curator for the Tenterden and District Museum, was awarded an MBE in the New Years Honours for over 21 years voluntary service to the Museum. 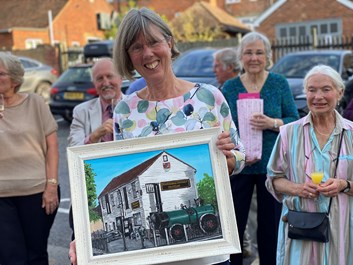 Debbie joined the Museum in 1999 as a Steward and took over as Curator soon after.  She was Curator for over 21 years, before standing down at the end of the season in 2020.  Her dedication and service, to the Museum and the Town, was recognised by Tenterden Town Council who made her a Freewoman of the Town, an honour granted to only half a dozen people in the last 25 years.  She is only the second woman to be honoured in this way.  Debbie was elected President of the museum in 2021.

Her nomination for a national award was supported by Kent County Council, the Mayor of Ashford Borough Council, Tenterden Town Council, the President of the museum and her co-workers at the Museum, who all felt that her contribution was worthy of national recognition.

In her time as Curator Debbie oversaw numerous improvements to the Museum including access for mobility impaired visitors to the whole ground floor, numerous special exhibitions and events and the improvement to the collection and displays, including the ever-popular 20th Century Exhibition.

Tenterden Museum is located in the heart of Tenterden, just off the High Street on Station Road.  It is open April through December and is one of the major tourist attractions in the town.  More information about the museum can be found on the website at www.tenterdenmuseum.co.uk.

Other News you may be interested in
New user-friendly Housing Register system to be rolled out
Have your say on Future Spaces in Chilmington Green!
You will need photo ID to vote in polling stations at local elections in May
Got a story to share?
Want the latest council news delivered straight to your inbox?
Complete our online form to sign up for regular email updates from the council.
Your Council
Transparency
Contact Us
Working for Us
Consultations
Conditions of Use