What is VE Day?

Victory in Europe (VE) Day, 8 May 1945, celebrates the German surrender during the Second World War. Millions of people rejoiced in the news that Nazi Germany had surrendered.

However, it was not the end of the conflict, the war against Japan did not end until August 1945, and the impact of the Second World War was felt long after Germany and Japan surrendered.

How was VE Day celebrated?

The announcement that the war had ended in Europe was broadcast to the British people over the radio on 7 May 1945. The BBC interrupted its scheduled programming with a news flash announcing that VE Day would be a national holiday. Newspapers ran the headlines as soon as they could, and special editions were printed to carry the long-awaited announcement.

Prime Minister Winston Churchill gained assurances from the Ministry of Food on the morning of 8 May 1945 that there would be enough supplies for celebrations and the Board of Trade announced that people could purchase red, white and blue bunting without using ration coupons.

Tuesday 8 May 1945 was an emotional day that millions of people had been waiting for. Many people were extremely happy that the fighting in Europe had stopped and there were big celebrations. Various events were organised to mark the occasion, including parades, thanksgiving services and street parties as communities came together to share in this historic moment.

However, not everyone celebrated VE Day. For those who had lost loved ones in the conflict, it was a time to reflect. Amidst the street parties and rejoicing, many people mourned the death of friends and relatives, or worried about those that were still serving overseas.

8 May 2020 marked the 75th anniversary of Victory in Europe (VE) Day, which was celebrated in the light of Coronavirus with a weekend of online activities from Friday 8 May to Sunday 10 May 2020.

Before the outbreak of the Coronavirus pandemic, we asked people to submit their photos for an 'Ashford in the Second World War' photographic exhibition. This has been turned into an online project.

The exhibition gives an insight into what life was like in Ashford in the Second World War including national and local photographs of Ashford's 1945 VE Day celebrations. This exhibition can be viewed in the window below.

Thank you to the following individuals and organisations that supplied images and information to enable us to put together this exhibition:

A message from the Mayor

The Mayor of Ashford, Councillor Jenny Webb, sent a message to residents.

Listen to a commemorative poem, VE Day by Angela Whybrow, read by Cpl Prior from the Ashford Squadron ATC of the Royal Air Force Cadets. Read transcript of VE Day poem [pdf] 407KB.

The following videos were created by local resident Ian Wolverson.

The first video remembers air force personnel from around the world who flew from the RAF Ashford base (where Chilmington is now situated) who sadly lost their lives during World War Two.

The video below remembers local residents who sadly lost their lives during World War Two.

Many residents held their own 'stay at home' street parties over the weekend of 8-10 May, decorating their houses and windows with red, white and blue bunting.

Below are some images, from left to right we have: A dog posing in front of Union Jack bunting in Wye, SSgt Ethan Jeffrey and also Lance Corporal Finch from the Ashford Detachment Senior Cadets observing the two minute silence on VE Day. 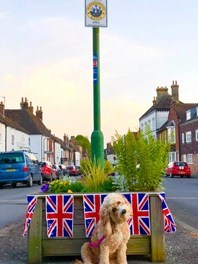 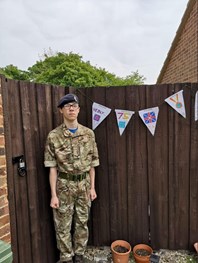 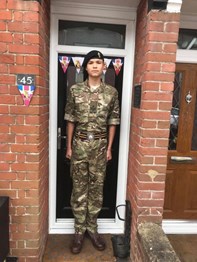 From left to right below we have: Arcon Close decorated for VE Day celebrations, residents in Bethersden handing out goodie bags through their Nominate a Neighbour scheme, and VE Day signage that was set-up at the Community Wheelbarrow in Clap Hill, Aldington. 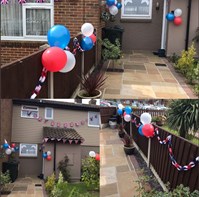 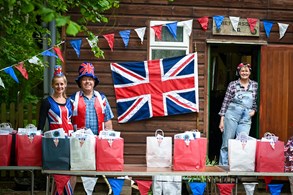 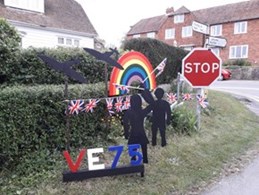