Remembering the Night a German Bomber Crash-landed in Kennington

This year marks the 80th anniversary of a Second Word War German bomber crash-landing near the mound on Spearpoint Recreation Ground. What is remarkable about the incident is the kind generosity shown by the residents of Kennington to the German airmen. Now, 80 years later, the Kennington residents have proudly unveiled a new plaque to remember this occasion. 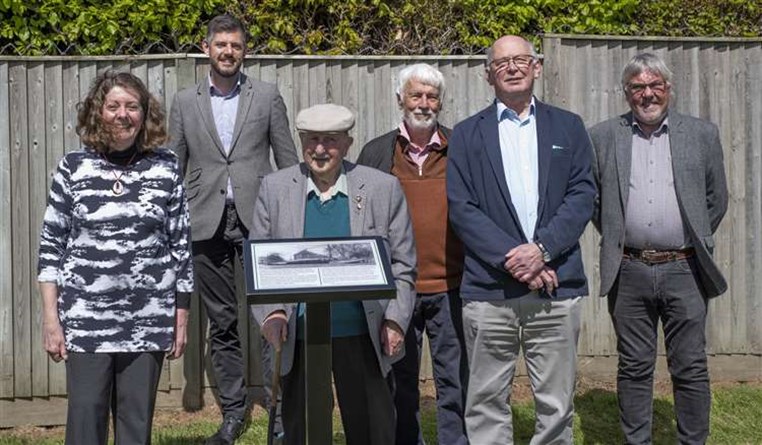 Among those at the plaque unveiling were: Cllr Matthew Forest, Ashford Borough Council's Twinning Champion; Philippa Seager, Secretary of Ashford Twinning Association; Peter Rainer, who was one of the first people on the scene when the plane crashed; Robin Britcher, author of ‘Kennington at War 1939-1948’; Chris Morley, Kennington Community Forum member; and Alan Dean, Chairman of Kennington Community Council.

Alan Dean said: “This is a remarkable story of local residents, at the height of war, showing a humane response to rescue and care for young men in peril. I am so glad the council agreed to respond to the proposal for a plaque and that it could be erected with one of the original witnesses, Peter Rainer, here to see it.”

Pictured below: the plaque that was unveiled at Spearpoint Recreation Ground © Ellie Crook. 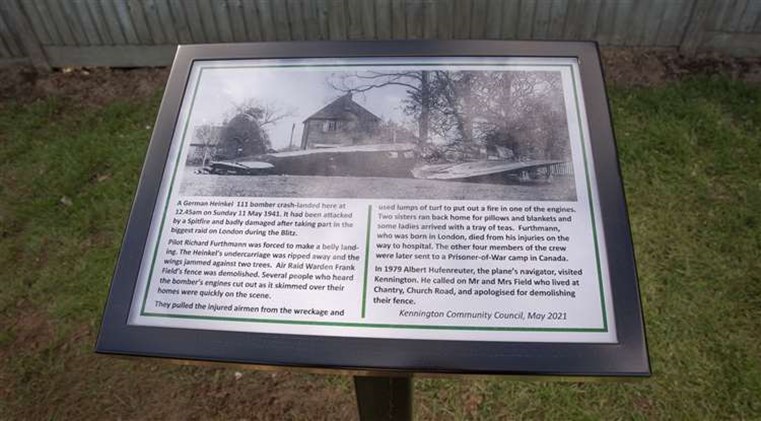 A Heinkel He-111 crash-landed on what is now Spearpoint Recreation Ground at 12.45am on 11 May 1941. The German bomber had left Lille, France, two hours earlier to attack the London docks. It turned out to be the heaviest and most devastating raid on London during the blitz.

Richard Furthmann, a German who was born in London, piloted the Heinkel He-111 No. 3976. The bomber had dropped its 1,000lb bomb and incendiaries over Stepney and was returning to France when a Spitfire flown by Roger Boulding attacked it.

Boulding made six attacks, knocking out the Heinkel’s port engine and damaging the starboard engine.  Furthmann dived down to 150ft. to try to escape the Spitfire but was forced to make a belly landing in the field then used for grazing animals.  When the bomber crash-landed one wing demolished a fence at the end of the garden belonging to air raid warden Frank Field of Church Road.

Pictured below: The Heinkel bomber that crash-landed on Spearpoint Recreation Ground in May 1941 © Robin Britcher. 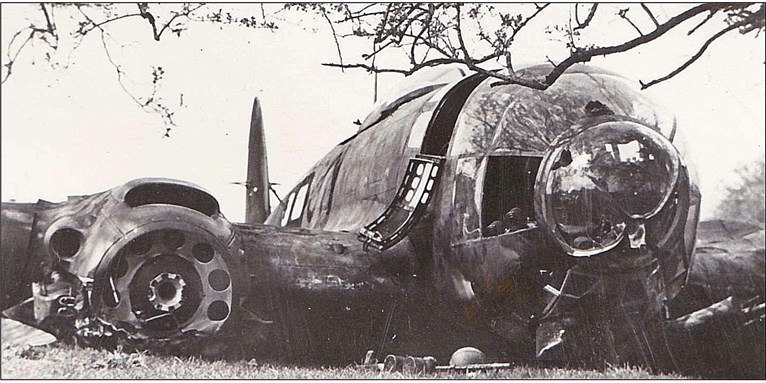 It is remarkable that, despite being at war with Germany, the good people of Kennington were quick to help the German airmen. Mr Field and Fred Huckstepp, who saw the plane pass his bedroom window, were quickly on the scene.  Mr. Huckstepp helped pilot Furthmann, whose back was broken, out through the cockpit window and laid him on the grass.

Charles Peters and his daughters, Joan and Joyce, soon arrived on the scene. The daughters went back home for pillows and blankets, and soon some local women arrived with a tray of teas and attended to the injured airmen.

Gunner Edgar Weber had broken both of his legs, Navigator Albert Hufenreuter had one broken leg, Radio Operator Karol Gerhardt and Flight Engineer Josef Berzbach were also injured, and Pilot Richard Furthmann died later in the ambulance before reaching hospital. The four surviving members of the crew recovered from their injuries and were sent to a prisoner of war camp in Canada.

The son of Navigator Albert Hufenreuter later said that: “My father was treated so well he couldn’t really believe his good fortune.”

In 1979, Albert Hufenreuter, who became an English teacher before ending his career as a headmaster of a school in Hamburg, returned to Kennington. He called on Peter Huckstepp, who was a teenager when he had helped the airmen, to thank him for saving his life. Peter and his wife invited Albert into their home and gave him a cup of tea. Albert told Peter how the raid was to be his squadron’s last mission before being posted to Russia, where he would likely not survive. Albert Hufenreuter also visited Mr and Mrs Field to apologise for demolishing their fence.

The events of 11 May 1941 are told by Peter Rainer in a YouTube video, ‘The Night a Heinkel Crashed in Kent’. It was made by Wildwood Media and produced by Robin Britcher, author of Kennington at War 1939-1945, and David Hebditch of Baby Art Kent/Portland Studios, Sandgate.